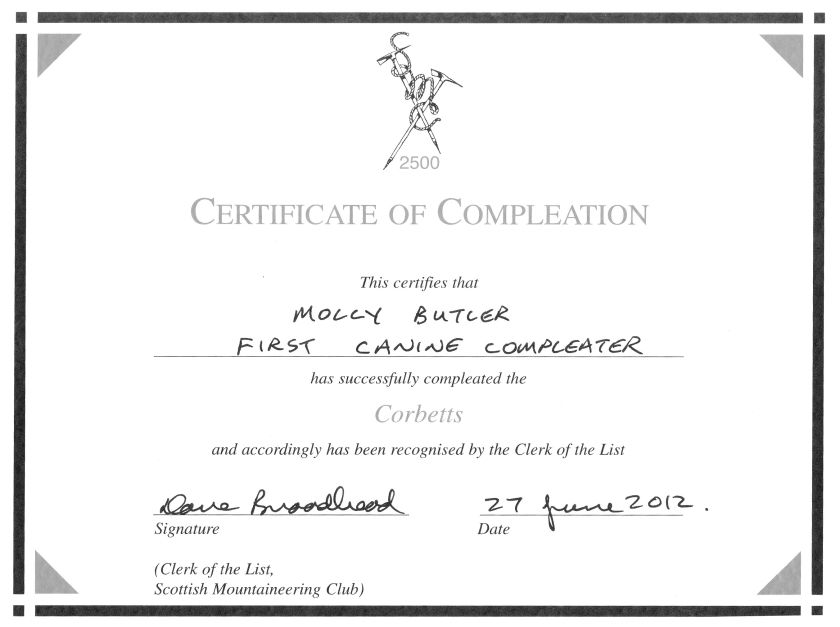 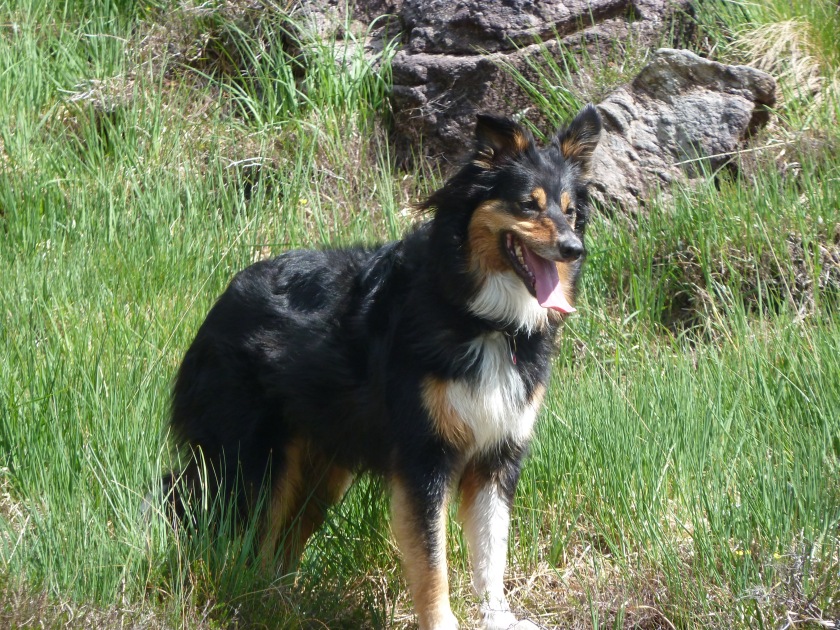 ‘She’ll need a lot of exercise’ said the farmer as he handed me over to my new Humans. Well they certainly took him at his word.

I was born on a Dartmoor hill farm and spent my puppy hood surrounded by moors, tors, hills with loads of fantastically smelly things to roll in and apart from a couple of embarrassing encounters where I was beaten up by sheep, life couldn’t get any better. Then when I was six months old one of The Humans gave up work so she could devote herself to entertaining me full time. Such dedication.

Shortly after my first birthday The Humans started preparing for my first holiday. I had no idea what this involved and I nervously watched as my bed, toys and huge quantities of dog food were loaded into the back of the car. The journey was very dull but eventually we arrived. Wow! All this space to run around in, the hills looked huge and most of them were covered in some funny white powdery stuff. I couldn’t wait to investigate.

My first adventure was on a Munro called Creise.  The white stuff made me want to run around like a puppy again……………….in fact after all these years it still does. After a couple of hours, we reached a pile of stones and The Humans stopped, patted me, took my photo and gave me my lunch. A strange ritual that they seem to follow every time we reach a pile of stones. My bagging career had started and during the holiday I climbed my first Corbett, Beinn an Lochain.

A few months later The Humans packed everything we owned into a lorry and we drove north to Helensburgh, but this time we didn’t go home again. I certainly wasn’t going to complain because each night The Humans would look at something called the ‘weather forecast’ and if they started smiling, I knew I would be getting a good walk the next day. We drove for miles to climb up hills and touch the pile of stones at the top and before I knew it I had climbed my 50th Corbett on Beinn Maol Chaluim.

After a few months The Humans packed everything into another lorry and unloaded it in Aviemore. It was November and there was white powdery stuff everywhere, even in our garden!

We kept walking and walking and after a year I was rewarded with a celebratory sausage on Beinn Spionnlaidh to mark my 100th Corbett.

As if walking wasn’t enough The Humans started to experiment with other forms of transport. One day Uncle Andy turned up and made us sit in a lump of plastic and we floated to Ben Aden. This was not an enjoyable experience and I sat on her lap shaking the whole way. I was very relieved to get out and put up a bit of struggle when they tried to get me back in it again.

I became quite an expert on the canine facilities aboard CalMac ferries and I loved to chase The Humans on their bikes in a futile attempt to make them go faster. On one of my overseas trips The Humans took me to Arran and Uncle Andy took us on to the A’Chir ridge. I was having great fun leaping up and down the rocks when suddenly we arrived at a huge drop. ‘No problem’ says Andy. Whoever heard of a dog abseiling? I don’t think I’ll be doing that again in a hurry. 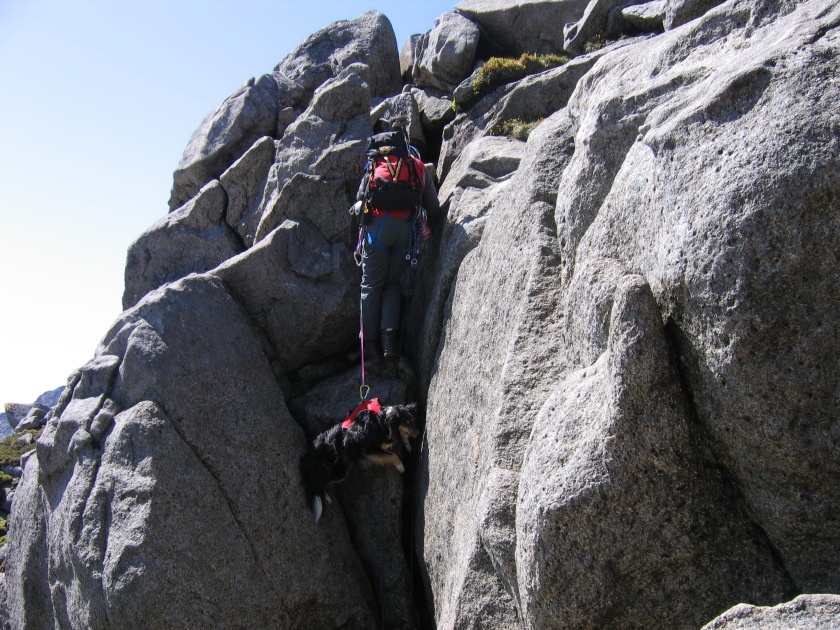 Last year The Humans took me for a walk on a mountain that was on fire!! I was becoming a bit concerned about burning my paws when a huge noisy helicopter appeared and whisked us back to safety. Now that was fun!

In 2012 we walked up to The Cobbler again, but instead of waiting patiently at the bottom, guarding the rucksacks while The Humans climbed it I was trussed up in my climbing harness and before I knew it I was standing on the top!

I traveled the length and breadth of Scotland with The Humans and slowly but surely, I reached 150 on a very snowy Sail Mhor and climbed my 200th during a heat wave on Beinn an Eoin. With only a few Corbetts left to climb I found out that it was probable that I had  walked where no other dog had walked before and plans were made for a celebration on Garbh Bheinn. 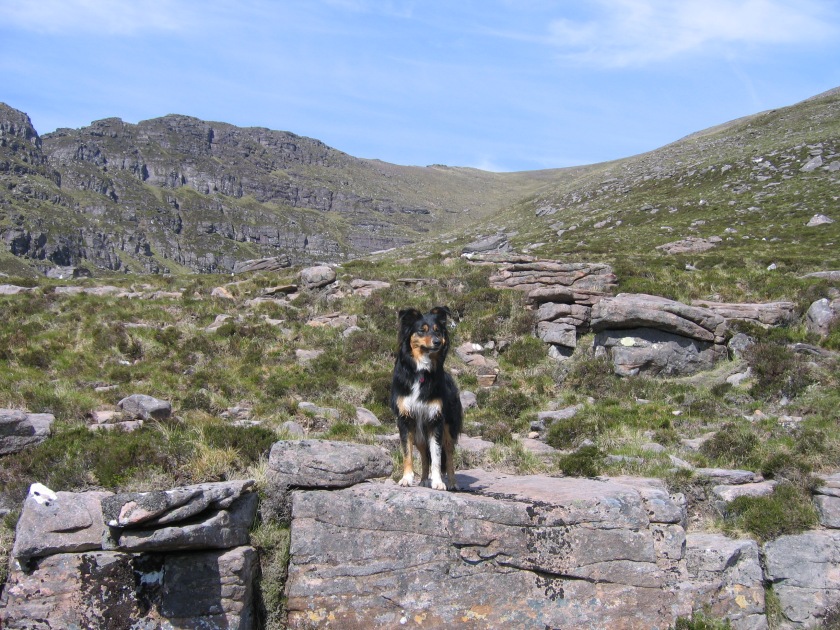 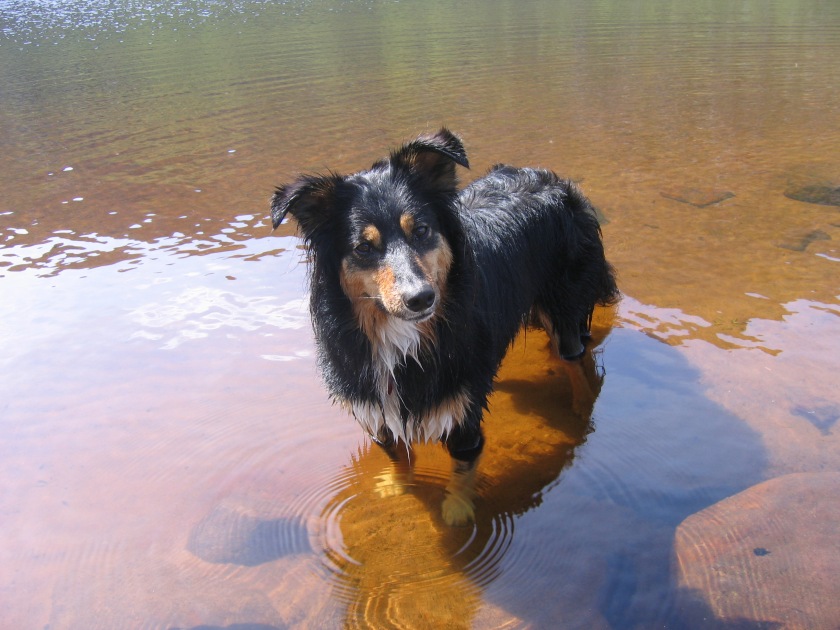 I thought I was going to burst with excitement! Everywhere I looked more and more of my friends and their doggie companions were appearing. We set off up Garbh Bheinn and once we got to the summit all The Humans seemed very pleased with me, I must have done something special as I was presented with a huge packet of sausages. The Humans were patting me and shaking my paw and everybody was taking my photo.

The idea of Molly completing the Corbetts begun in 2011 when I was updating her hill log and realised she only had 20 to go. The trouble was they were rather widely distributed and the last few walks meant some lengthy drives. South to the Borders, Galloway and Tyndrum, west to Skye and Ardgour and finally north to Foinaven.

Some detailed research followed (Hamish Brown, owner of Kitchy, the first dog to complete the Munros and Dave Hewitt of Angry Corrie fame both helped) and this showed that there had never been a recorded canine Corbett completer so it looked like Molly was likely to gain that honour.

The completion date was set for 13th May but the forecast torrential rain and 100 mph winds materialised and we didn’t even get out of the car. A rescheduled date was planned for 2nd June and the forecast looked pretty good.

We assembled in Ardgour with Molly’s invited guests gathering from afar and 5 dogs adding to the general air of bedlam. 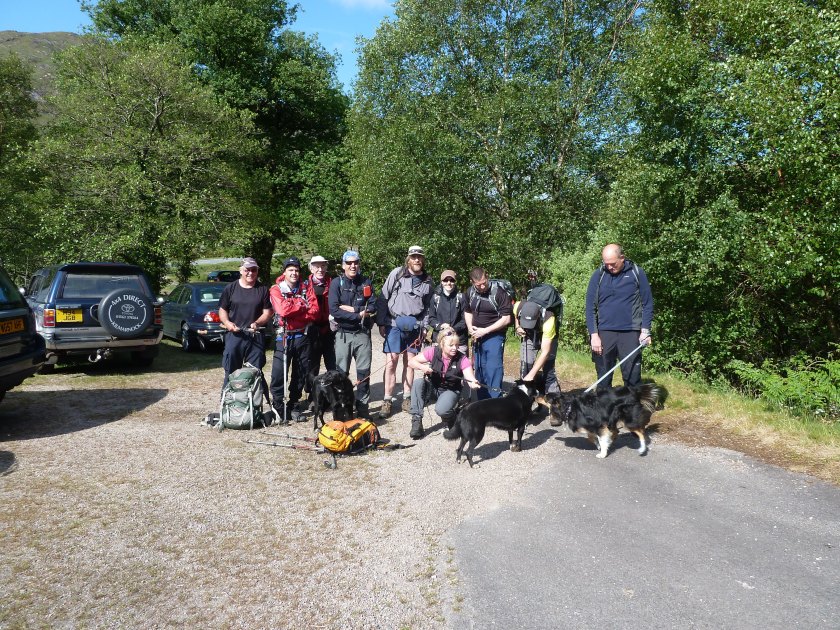 We plodded steadily up the ridge to the 823m top with the views opening up all around us. 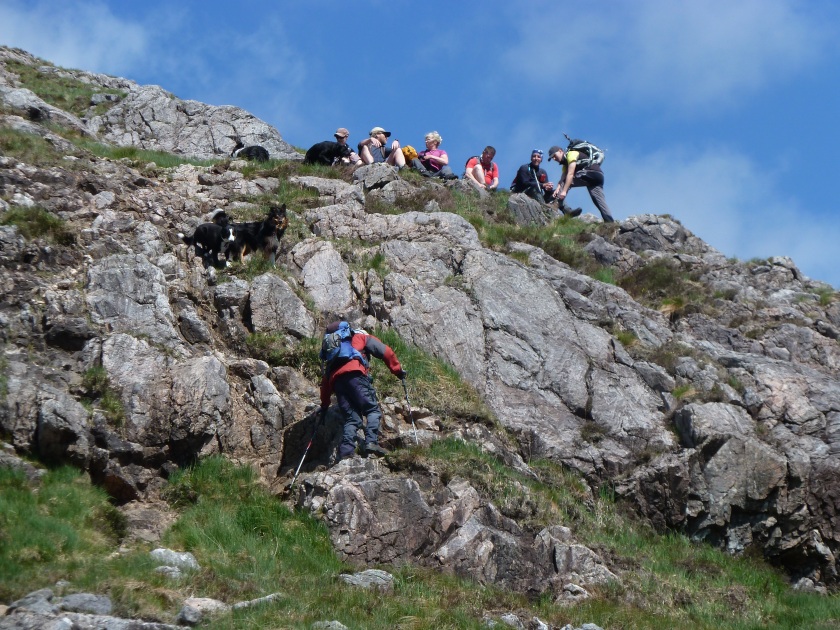 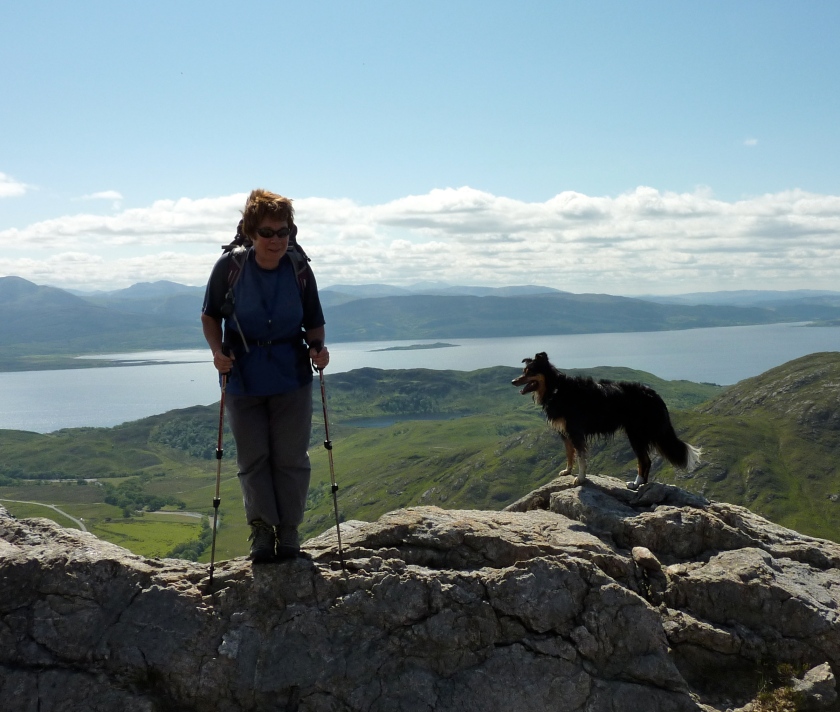 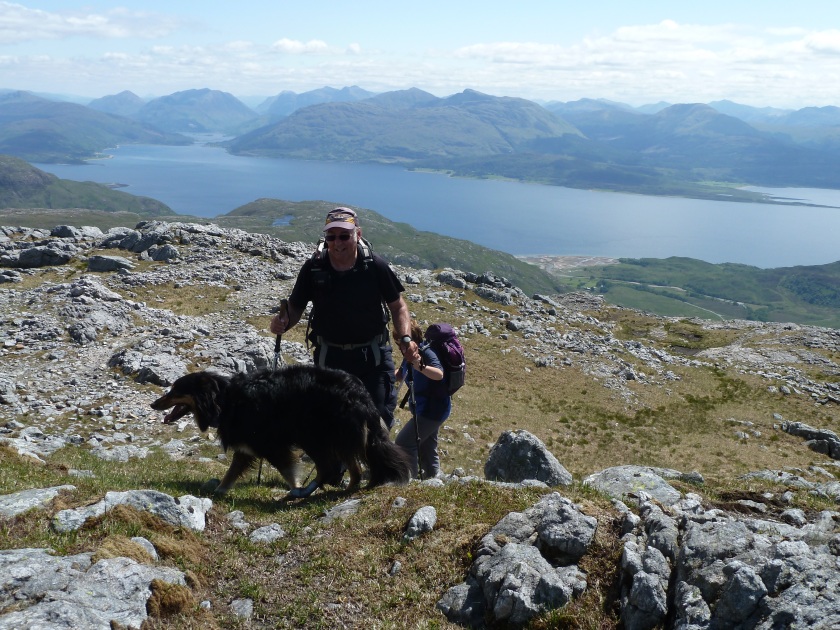 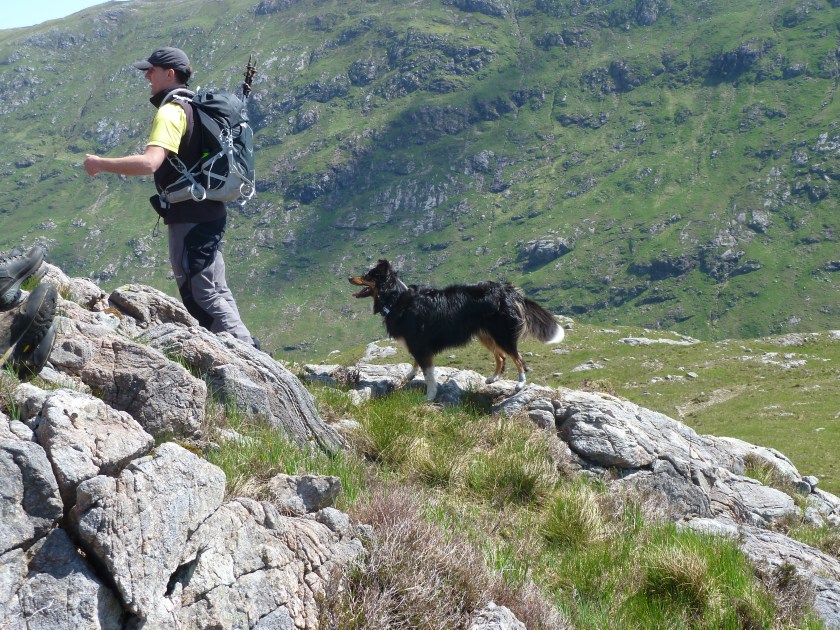 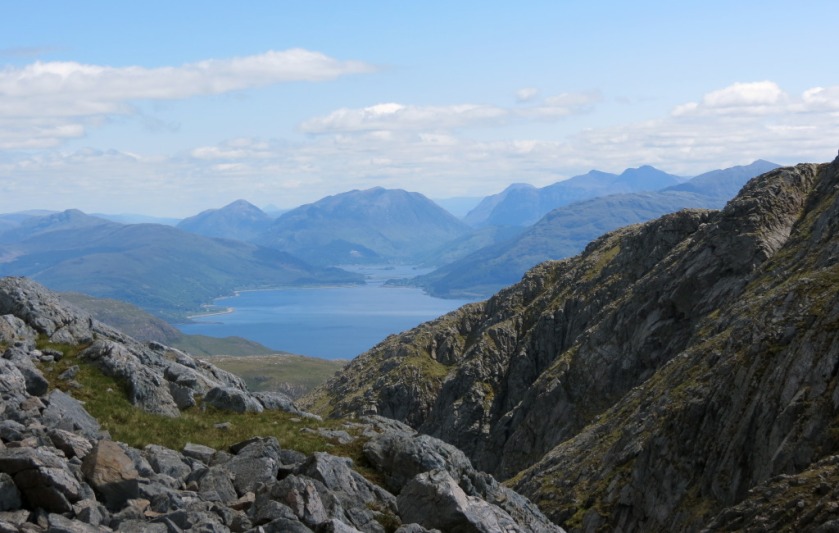 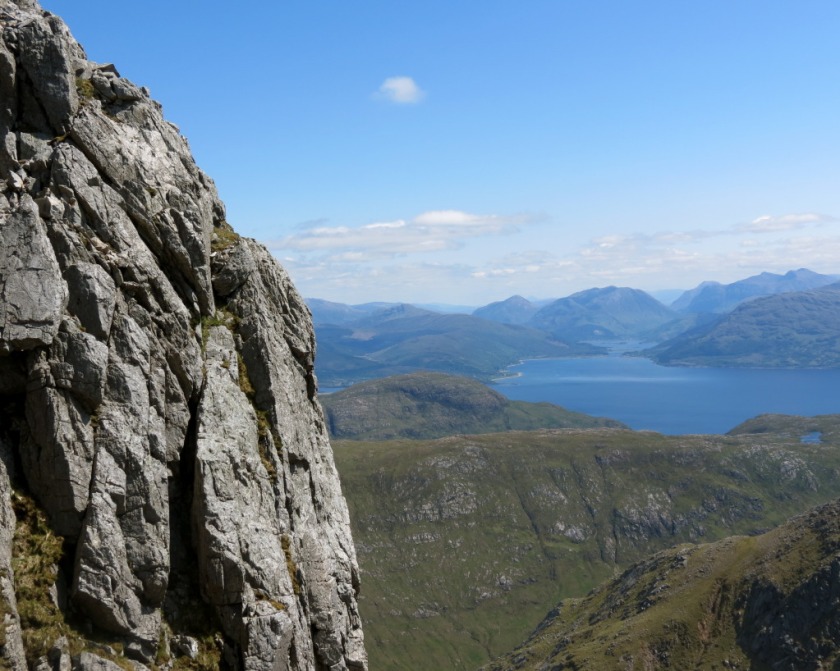 Molly and her assembled canine companions. 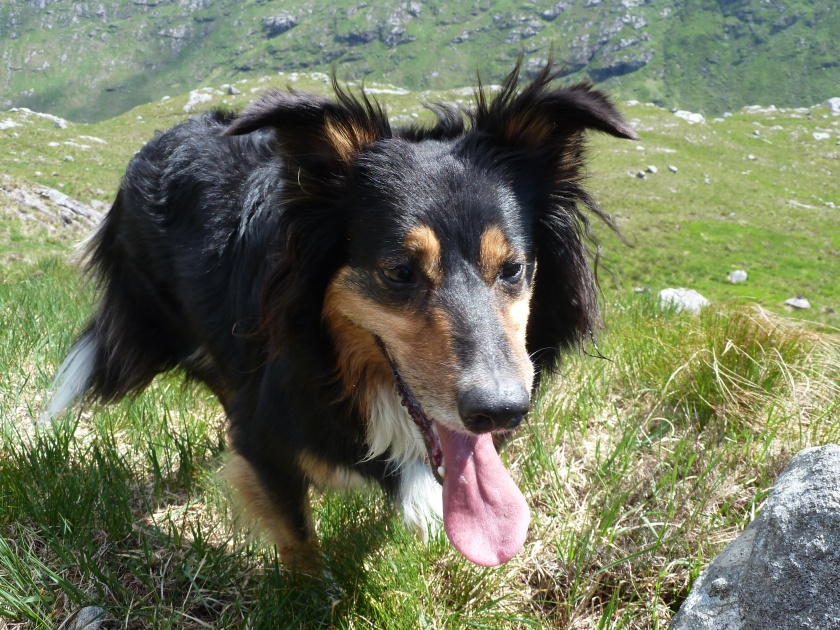 As we approached the summit, we were greeted by Hamish Brown who had made the journey specially to congratulate Molly on her achievement. 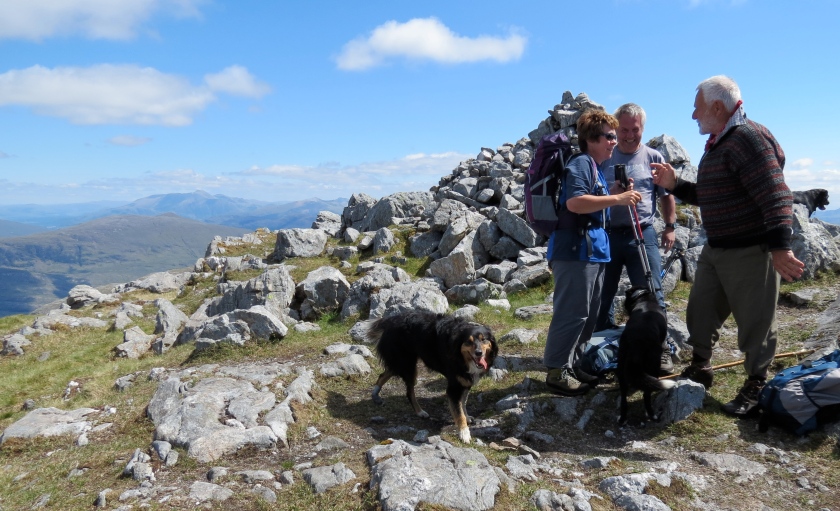 We finally managed to make Molly stand still for long enough to take a couple of summit photos, modelling her doggie buff which was sent to her as a completion present. 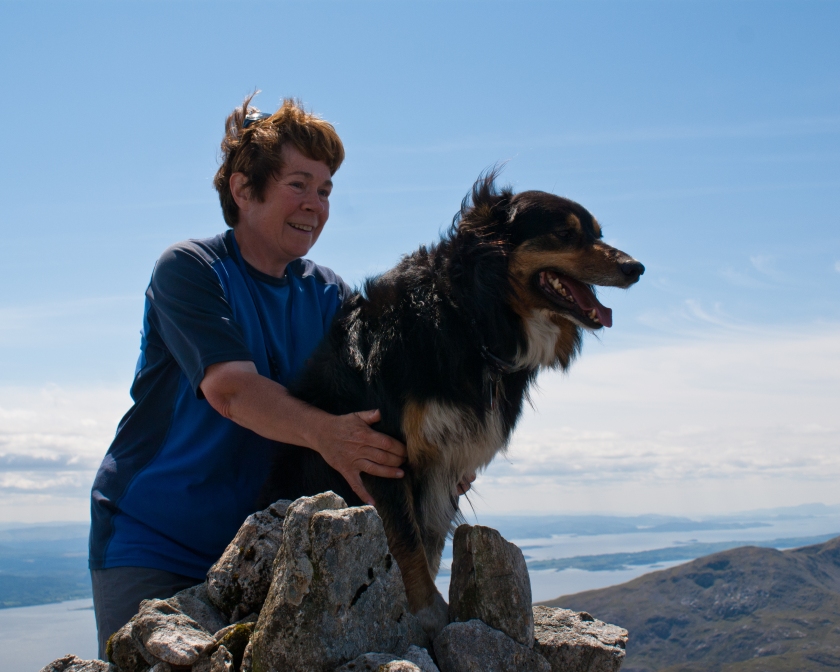 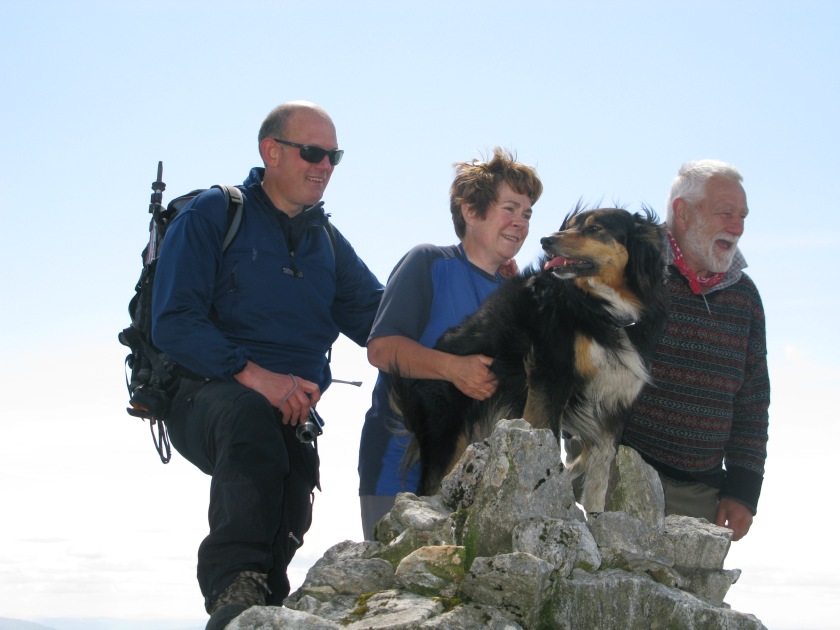 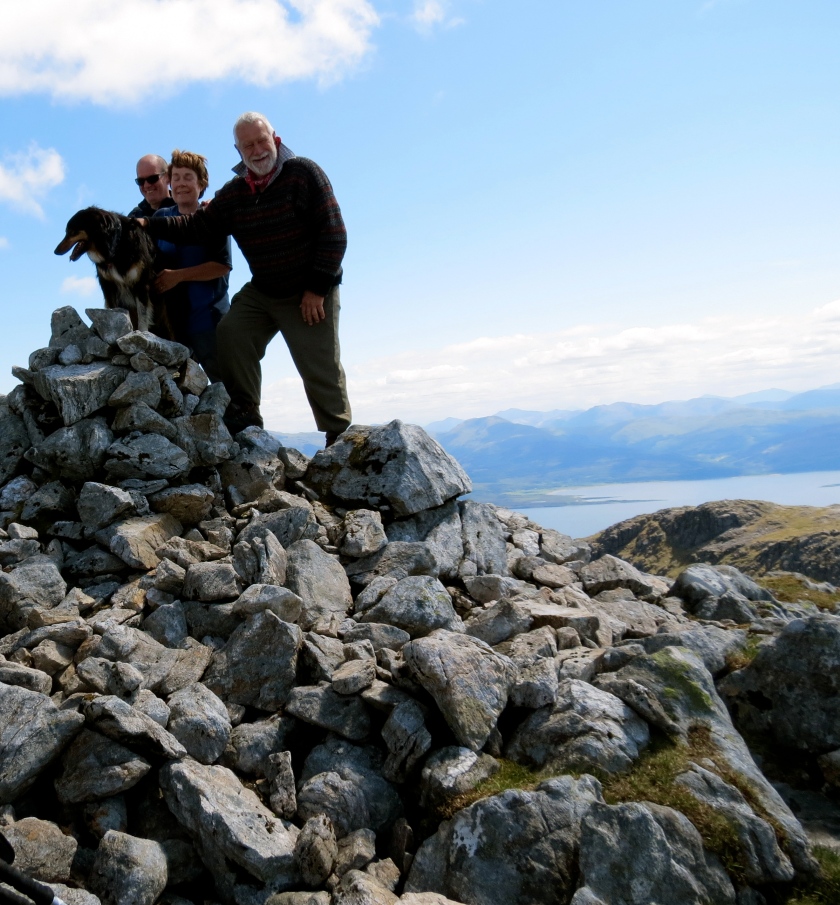 Molly and her companions were presented with a packet of sausages each. Most of the dogs scoffed theirs down in a couple of minutes but Robin managed to save a few to torment the dogs with.

We celebrated with the by now traditional cookies and champagne and in all the excitement I totally forgot to get the group together for a summit photo. 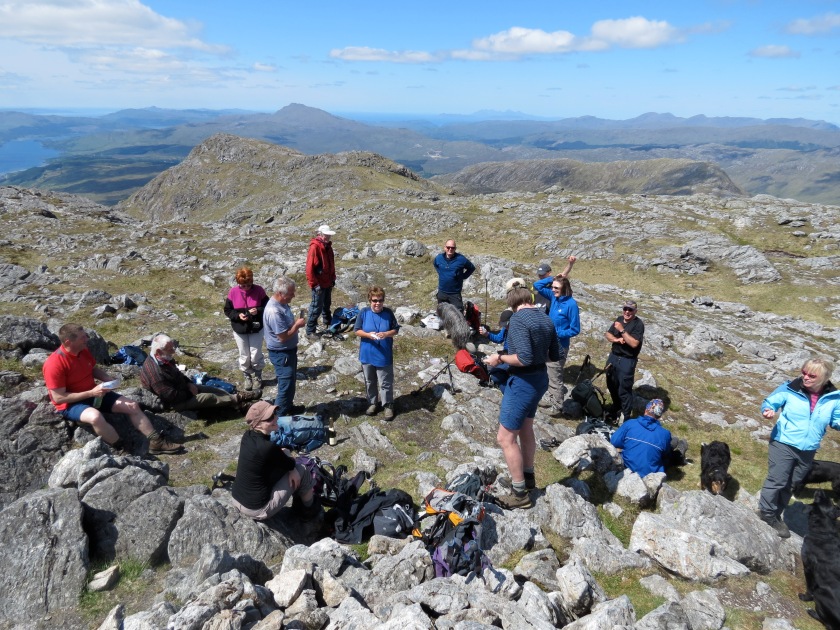 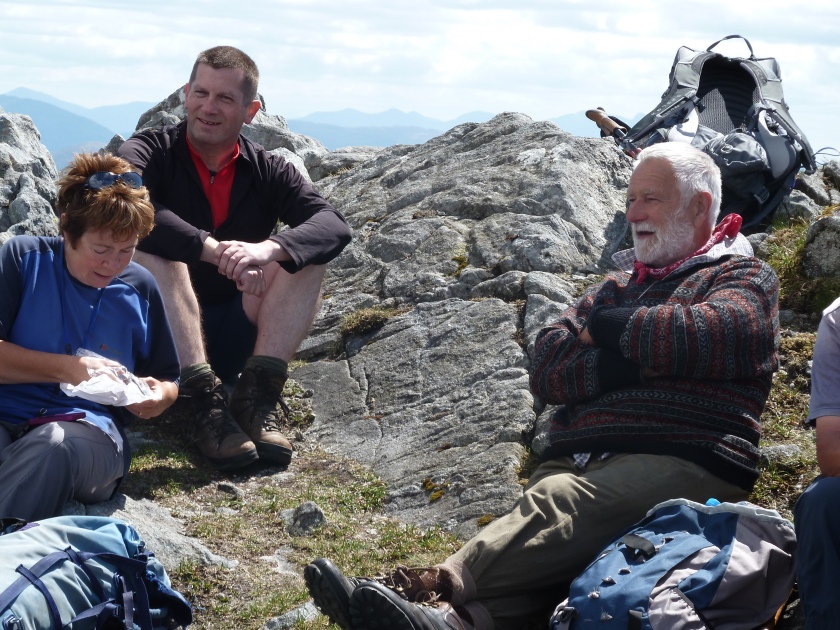 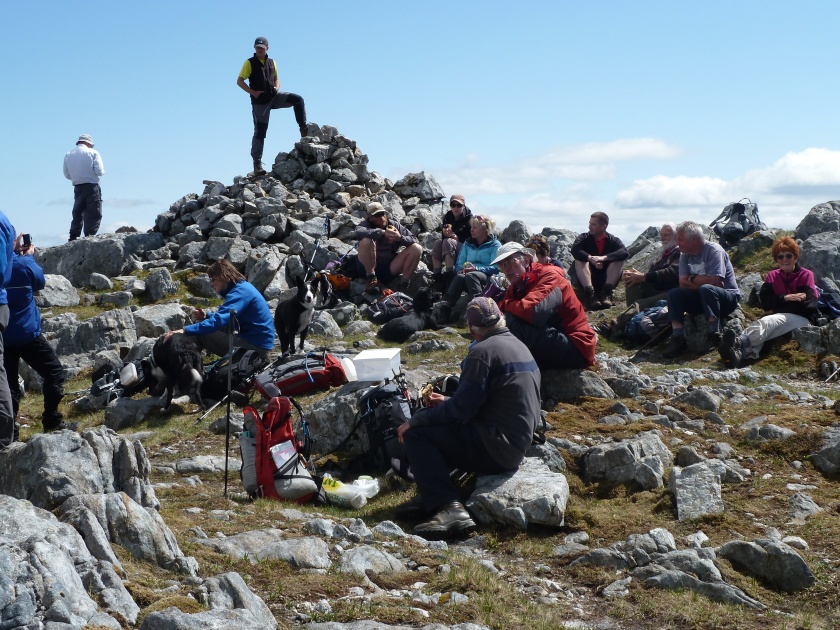 Molly was presented with a completion Frisbee at the summit just in case she wasn’t excited enough. 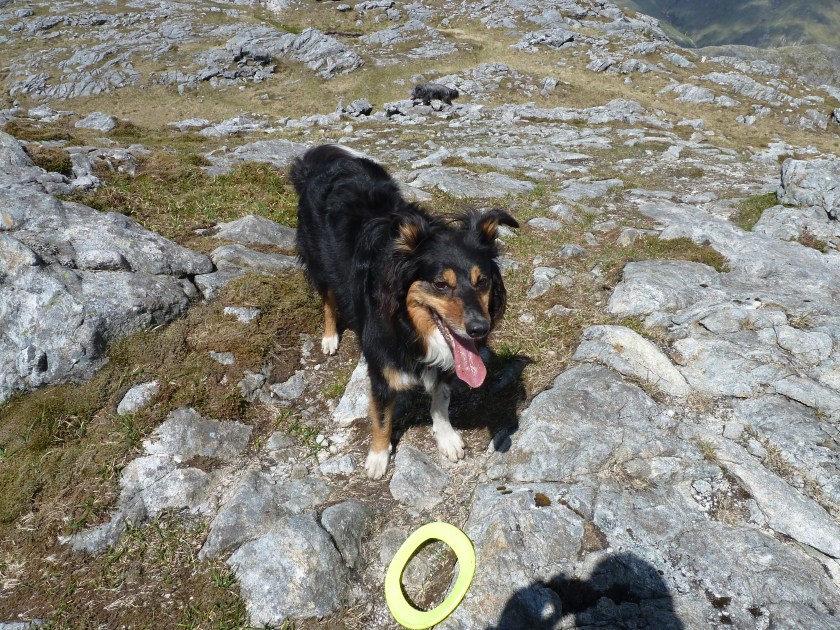 Celebrations over we took a leisurely stroll back down the hill followed by a cool refreshing pint in The Ardgour Inn before we all went our separate ways.