Anyone who has completed a round of Munros will know that planning plays a vital part in reaching that goal. I am usually quite good at planning, so how was it, with a mere six days to go until my 4th Round completion party I found myself with the four Mullardoch Munros and four of the Fisherfield Six left to climb?

Things hit a major hurdle when Stewart and I arrived at the locked gate in Glen Strathfarrar on Sunday morning aiming for a swift round of the Mullardoch Four from the end of the glen. Booting up in the carpark Stewart realised he has managed to bring two identical left boots with him rather than a pair! Thankfully disaster was averted when a couple parked next to us offered to loan Stewart a pair of boots for the day and the walk was saved. After a successful walk over the four Munros, only incurring minor wrath from the gatekeeper for being 5 minutes late the Weather Gods at MWIS indicated that there would be a small weather window on Tuesday for our visit to Fisherfield. Stewart was keen to join the trip and promised to bring the correct configuration of boots this time.

We left Corriehallie heavily laden with provisions for two nights and struggled up the track in scorching sunshine. As we reached the summit of the path Fisherfield was laid out in front of us in all its glorious splendour, we descended down the mercifully dry path to Shenavall bothy and commandeered the upstairs room where we unpacked, spread out and spent a joyous half an hour annihilating midges. An anxious trip down to the river showed that the notoriously troublesome Abhainn Strath na Sealga was very low; however the MWIS had promised torrential heavy showers for the next 24 hours so we went to sleep after offering bedtime prayers to the Weather Gods to look favourably on us for the next 24 hours.

The following morning dawned dry, cool and bright and we were off just after 6 a.m following a heroic battle with the midges, but thankfully many of them appeared to be having a lie in. On previous visits to Fisherfield we have always started off our round with a lung bursting, calf burning full frontal assault on Beinn a’ Chlaidheimh. This time, as we were only tackling four of the Munros we allowed ourselves the luxury of a gentle start and followed the track to Achneigie, paddled across the river which was little more than a small stream and climbed up the gentle western slopes.

The ascent wasn’t too unpleasant, although at one point I did begin to wonder if my altimeter had stopped working. We picked our way over sandstone slabs and up grassy gullies with the heather in full bloom and the day heating up rapidly. After an hour of sweaty huffing and puffing we arrived on the ridge with the full length of Gleann na Muice below us and a perfect vantage point into the corrie on Beinn Dearg Mor.

The summit didn’t take too long to reach and our first Munro of the day was bagged, only a matter of days before it was reclassified as a Corbett.

The rest of the day’s route was laid out in front of us, flecks of cloud capped some of the Fannaichs and Torridon hills but the views along the coast and across to An Teallach were clear. The only major cloud on the horizon was the anticipation of the climb up through the boulderfield on Sgurr Ban, at least the rocks were dry and we had good visibility, but this did also mean we could see exactly how far we still had to go!

The lochans at the bealach provided Molly with a very welcome cooling swim as the day was becoming increasingly warm and muggy and in reality, the climb up through the boudlerfield wasn’t as bad as it looked.

Typically, just as we arrived at the summit the cloud blew in and obscured any view……………..all that effort for nothing. As quickly as the cloud blew in it blew out again along with us feeling sorry for ourselves!

The route ahead was obvious with the eroded paths seemingly getting worse each time I visit……..I blame all those Munro Baggers.

The descent and reascent to Mullach Coire Mhic Fhearchair looked quite a slog but we reached the summit without breaking sweat; never underestimate the recuperative powers of chocolate.

Laziness overtook us and we decided to leave the two Munro Tops for another day was a decision I knew I would regret later.

Beinn Tarsuinn looked a long way away as we took to the bypass path around Meall Garbh watching a herd of deer cooling off in the lochans in the corrie below.

In my opinion Beinn Tarsuinn is by far the finest peak of the Fisherfield round but it hardly ever gets a mention.

The views from it are outstanding, one of the best places in Scotland to lie back and enjoy the solitude and indulge in a game of ‘name that hill’.

We had never really planned a definitive route back to the bothy and had narrowed it down to a couple of choices that we would assess ‘on the ground’. Not really very scientific but it works for us. We climbed over the table and down to the narrow notch in the ridge due west of the small lochan in the corrie.

We were obviously not the first people to descend this way as a small path zigzagged down the scree and through the boulders to the lochan.

The map indicated a gentle ridge leading north east via waterfalls to the Abhainn Gleann na Muice and this proved to be an ideal route choice. 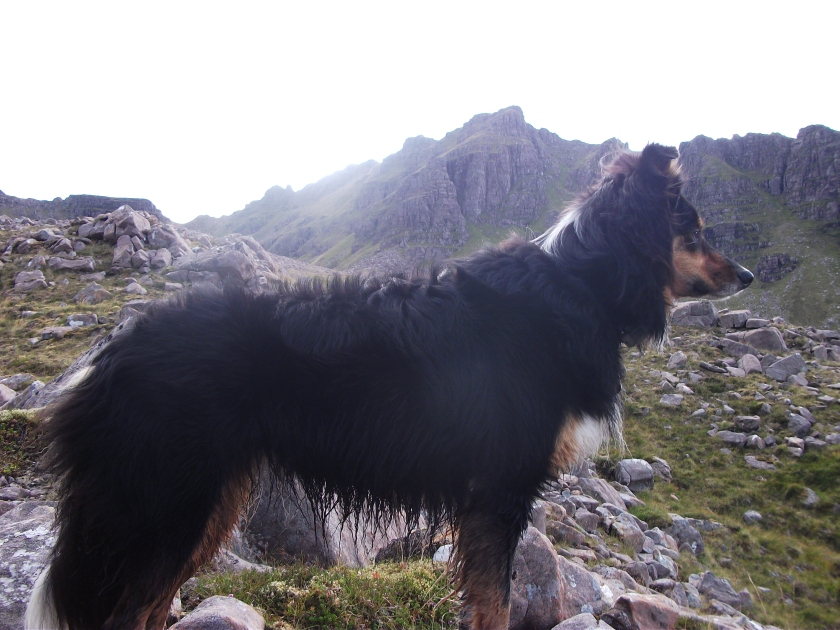 After a boulder hop across the river we picked up the path back to Larachantivore where the river crossing didn’t even reach the top of our boots.

The walk back through the swamp to Shenavall was delightfully bogless, the Abhainn Strath na Sealga was an easy paddle and we arrived back at the bothy relieved that our waterproofs had been carried as excess baggage all day.

The stove was flashed up and a mass of meaty pasta didn’t touch the sides on its way down. Halfway through our meal it suddenly sounded like somebody was aiming a fire hose directly on the bothy roof. The promised torrential rain had arrived and the ‘shower’ lasted well into the night. Several of our bothy companions from the previous evening arrived back during the evening bedraggled and sopping wet. The Weather Gods had been favouring us today, but how long would our luck last?

The next morning we woke to low cloud and the burn by the bothy was hooching down the hillside, a mass of peaty white water. An ever hopeful Stewart wondered down to the river but it wasn’t to be, the river was in angry mood and the Beinn Dearg’s would have to wait for another day.

We were back home by early afternoon with three days to spare before the completion party.