For many Munroists the mere mention of the words Am Faochagach brings them out in a cold sweat, its swamp like lower slopes, challenging river crossing and featureless plateau often relegate it to the bottom of their ‘to do’ list. Many an aspirant Munroist saves it for a poor weather day or a quick nip up and down on the way to or from the more exciting peaks of the north west.

Well I must be really contrary as I have always enjoyed this hill! It’s not too far to drive and is suitable for a short winters day, but I have to admit I have only ever climbed it from the south and have always tried to find a way to outsmart the river and always failed.

It was a cold winter’s day with a biting wind with a promising forecast as we arrived at the carpark just after sunrise. The carpark was covered in sheet ice so putting on boots resembled a beginner’s ice skating course and once we crossed the road we were very grateful to find the boggy moorland frozen solid.

The sun was breaking through and we were treated to some dazzling light effects to the east across Loch Glascarnoch but there was no putting off the inevitable; we were going to have to face the river crossing.

It had been reasonably dry recently (by NW highlands standards anyway) so the river level wasn’t too high. Usually we take our boots off, put on sandals, paddle across, towel dry and then put on lovely dry boots and socks. This time we had a pair of rubble sacks and some bungee cord which we put on over our boots and tied above our knees. We looked comical but it worked; across the knee high river with warm dry feet! 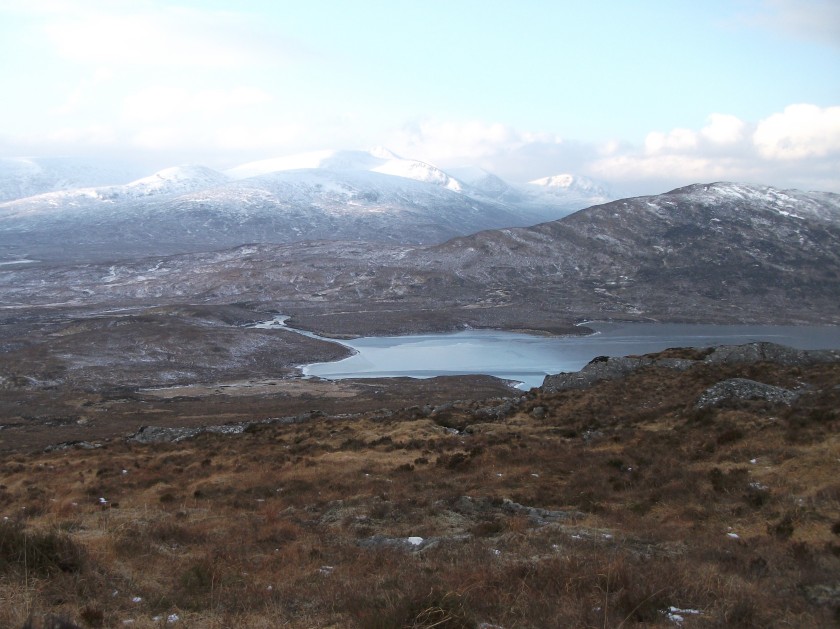 Route finding was easy up the eroded path into the snow where we warmed up quickly trail breaking onto the plateau. 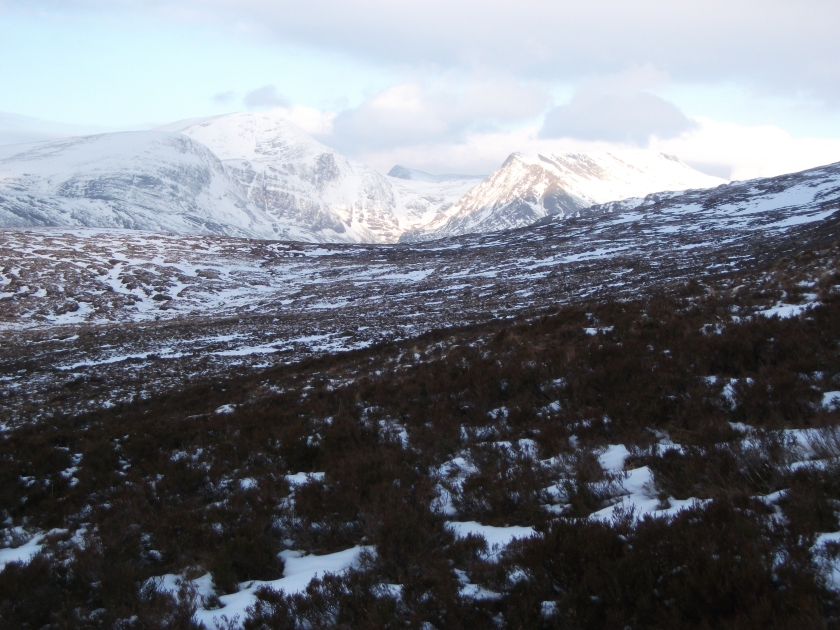 What greeted us on the plateau was winter walking at its best, views in all directions, sun and unbroken snow as far as the eye could see.

The snow was knee deep in places, the sun was shining and the biting wind was behind us so we were toasty warm on the walk to the summit. However, as soon as we stopped it was baltic and we rapidly retraced our steps to the col for lunch, an easy descent in the soft snow.

Much hilarity was had back at the river crossing as our rubble sacks began to leak about half way across and the icy water begun to seep in resulting in much laughter, swearing and squealing. Thankfully it was only a short walk across the now thawed out bogs back to the car.

Moral of the Day: Save Am Faochagach for a day like this and you won’t regret it.