An area of high pressure was fixed over the west of Scotland so we decided to go to Torridon. When we arrived in the lay-by at the foot of Liathach we noticed a small patch of smoke further down the glen which we assumed was some late muirburning. It was a stunning morning, very warm and it was a steep slog up the ‘path’ in Coire Liath Mhor, eventually reaching the ridge after 2 hours.

It was far too hot to be wearing a fur coat. 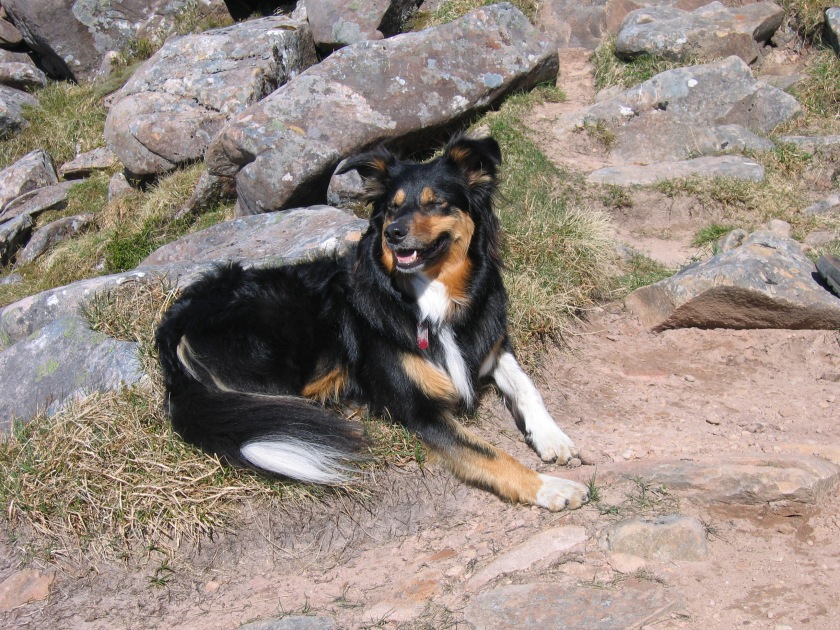 We continued along the ridge, enjoying a leisurely pace to the summit of the first Munro, Spidean a’ Choire Leith, where the ridge over the Am Fasarinen pinnacles was laid out in front of us. We met a Dutch gentleman at the summit using the hardback version of ‘The Munros’ book as his guide!

Looking towards the west we couldn’t see any signs of smoke, just a bit of a haze in the glen between Liathach and Beinn Alligin and spectacular views along the ridge over the Munro Top, Am Fasarinen to Mullach an Rathain and Coire na Caim. 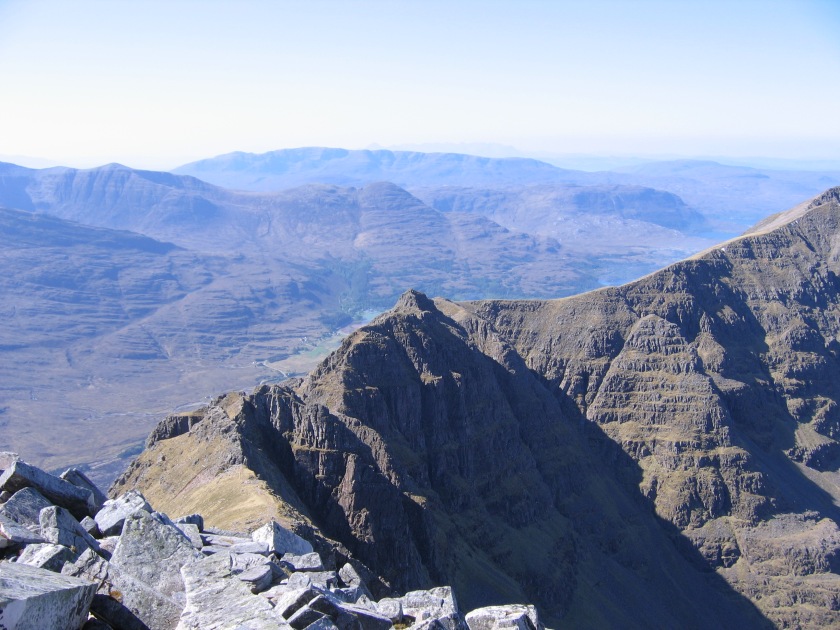 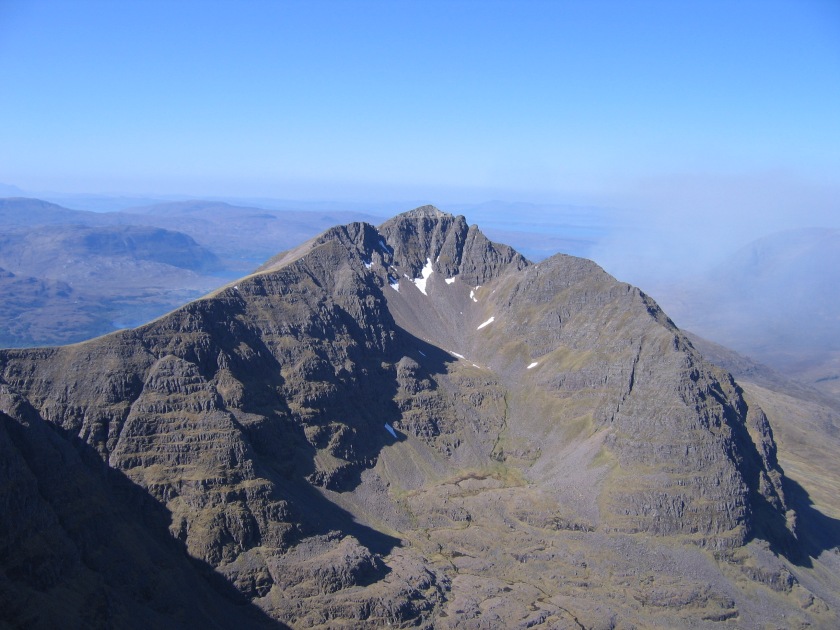 The path down from Spidean a’ Choire Leith was very eroded and loose but route finding was easy in the perfect visibility. We decided to use the bypass path around Am Fasarinen as I did not think my nerves would stand the strain of taking Molly and Stewart over the pinnacles, although I must add I have done them twice before!

It was the bypass path for us and Molly had a bit of a sulk about having her freedom curtailed. 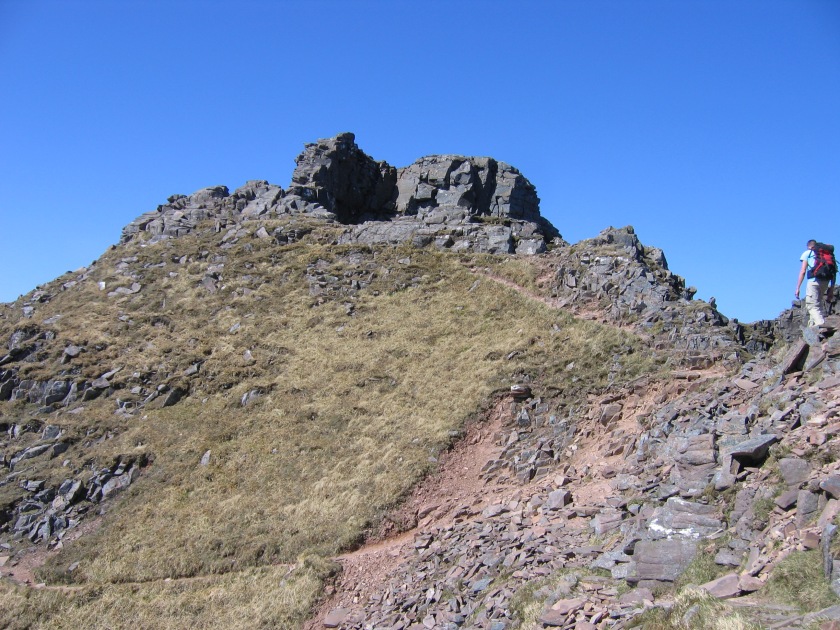 The bypass path is very straightforward but extremely exposed and I was glad that Molly was firmly tethered with her lead and harness. The exposed sections were thankfully over very quickly and the easy slopes of Mullach an Rathain were a welcome site. 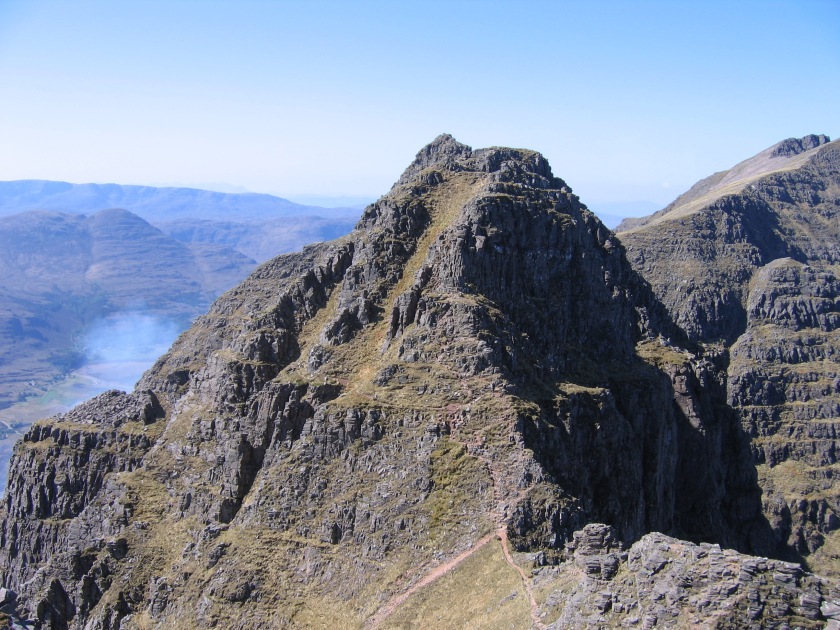 As we traversed the grassy ridge to Mullach an Rathain, we were becoming more aware of smoke in the air and we got our first view of the fire smoldering away below us.

The views back along the ridge were just as good. 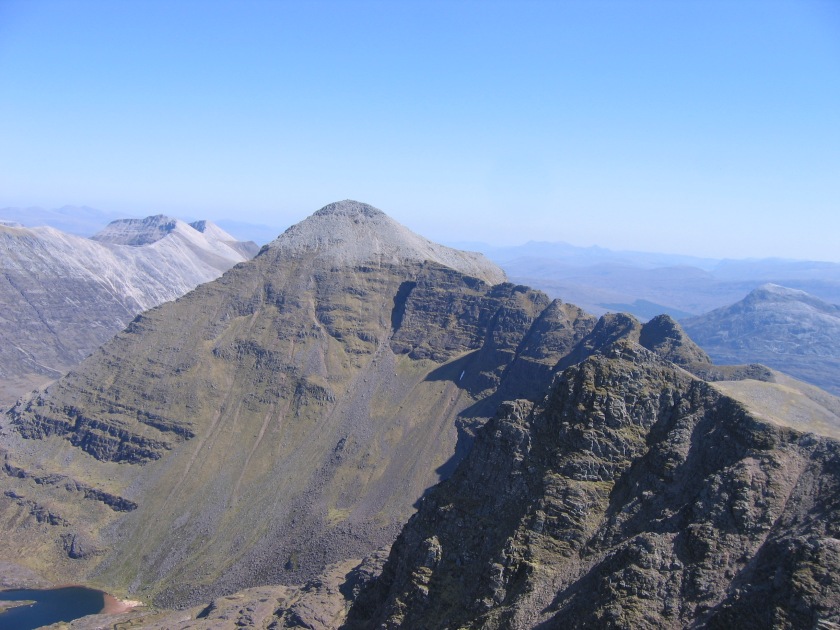 The Northern Pinnacles and Meall Dearg (a Munro Top) which is far easier from ’round the back’. 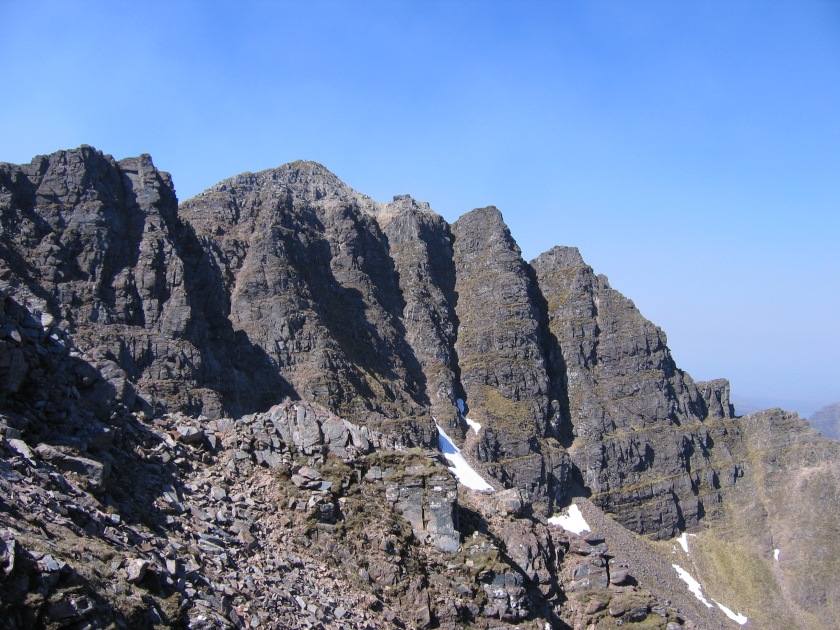 Looking towards Torridon there was a bit of haze and a whiff of wood smoke in the air.

We had lunch at the summit and the smoke was becoming troublesome. Not enough to affect our breathing but bad enough to make the back of our throats dry and our eyes sting. 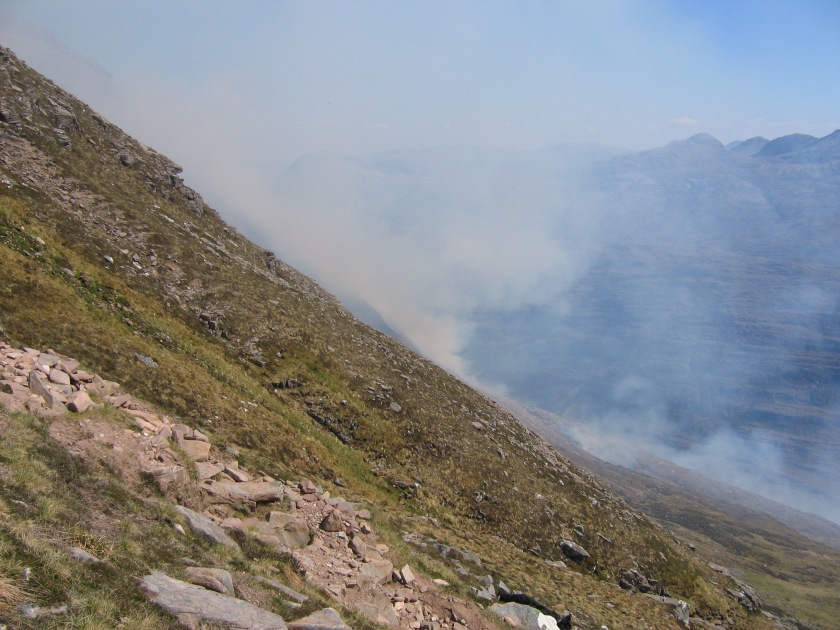 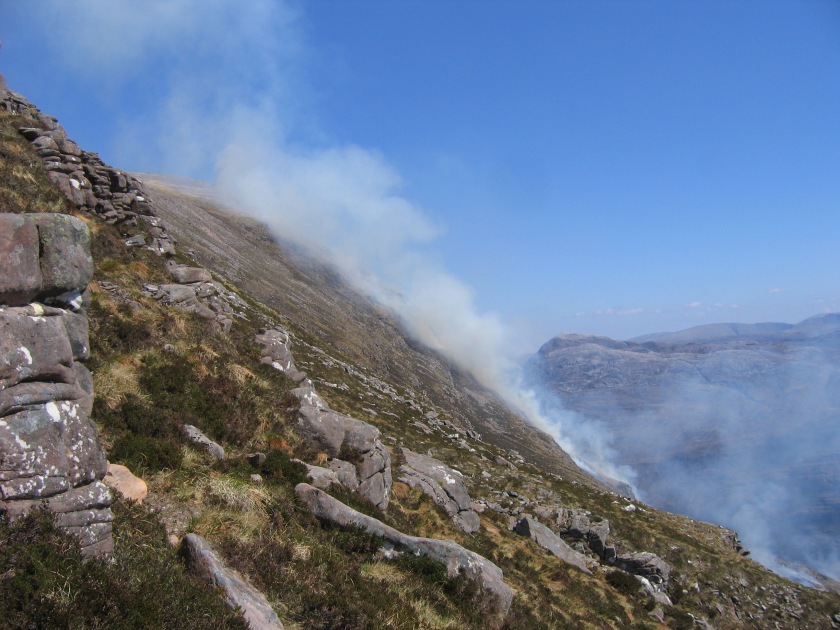 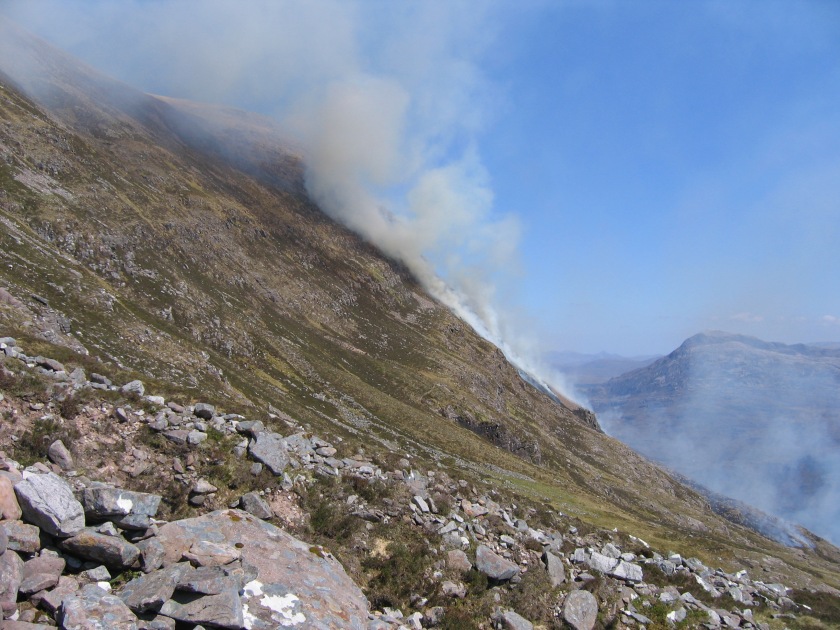 We begun our descent down the horribly eroded path into the corrie of Toll Ban.

As we descended through the corrie, we became more aware of the extent of the fire which we could see moving away from us across the hillside. We could see blackened and burnt areas above the roadside and discussed how we were going to carry Molly over this to make sure her paws did not get burnt. 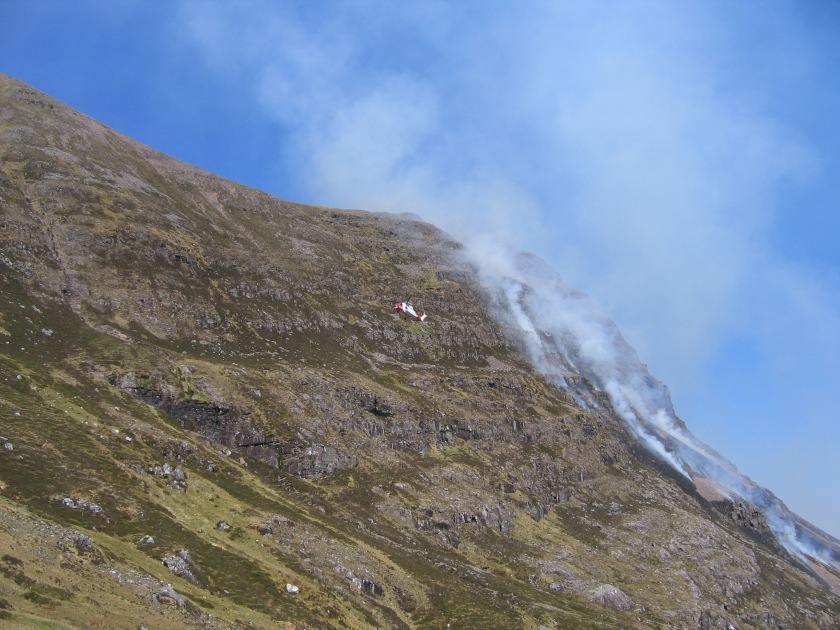 As we were chatting away a HMCG helicopter came in to view and flew over the fire and round the corrie a couple of times. We sat down to watch what was going on and the helicopter slowly descended behind us and a man jumped out.

The winchman explained, that although the fire was moving away from us, we wouldn’t be able to continue our descent through the corrie as the fire brigade wanted to start water bombing the fire front, we were in their way and they were not allowed to fly over us…………….health and safety rules apparently. For a minute I thought we would have to walk back up and descend by another route but our rescuer had other ideas and told us that they would give us a lift back to Torridon village. Result!

I have always fancied a ride in a helicopter and was really looking forward to our lift down the hill and the added bonus of saving 600m of knee jarring descent. Luckily, I had Molly’s climbing harness with me for our walk round the bypass path, the harness was also the same type used to winch SARDA dogs into helicopters, so Molly was trussed up and firmly tethered to our rescuer. She was not unduly concerned, just a little unnerved by the huge downdraft and noise coming from the hovering helicopter.

The Coastguard use Sikorsky helicopters which have a massive downdraft and as we were being attached to the strop’s to be winched on board it was impossible to stand and as soon as I let go of my rucksack it blew away. Stewart was lifted first but managed to spin so much they had to land him and try again. The helicopter came lower, our rucksacks went up on the first lift and Stewart and I on the second lift in a double strop. Stewart thinks that he didn’t spin on the second lift due to the extra ballast I provided!

Once we were in the helicopter we were strapped in at the back and Molly came up firmly attached to the winchman. She wasn’t happy but thankfully not too nervous and lay down on the floor whilst two other walkers were winched aboard. Four humans and one very relieved dog were deposited in the field opposite the Youth Hostel within a couple of minutes, the helicopter and an MRT person flew back up to the ridge to scan it for other walkers and another two were lifted off later. The helicopter was then called to Kintail to lift a couple off the Five Sisters who were also trapped by a wildfire there.

We then started walking back along the glen to our car and managed to get an idea of the devastation the fire had caused. 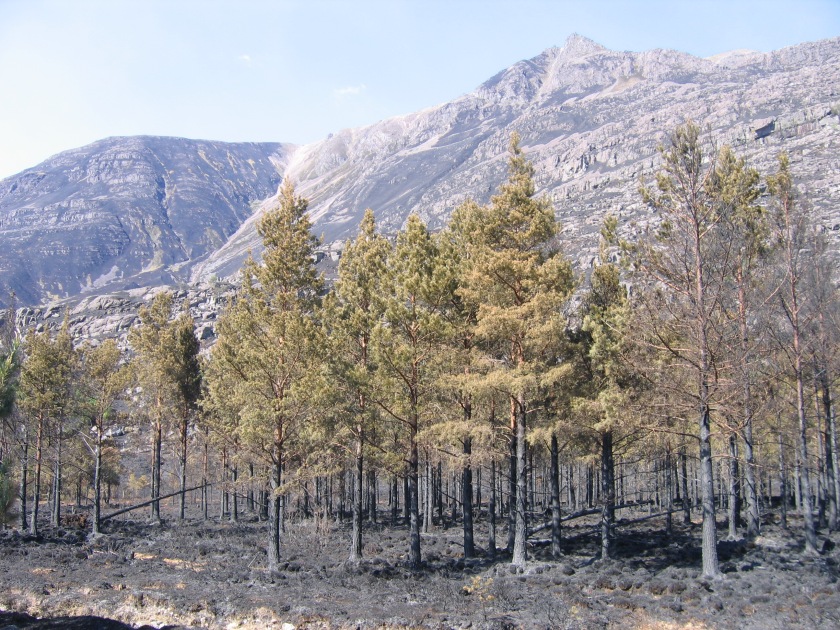 As we rounded the corner we saw the smaller helicopter in action water bombing the fire. The water was being gathered from the river and dumped on the hillside, each dump taking less than a minute and it was incredible how quickly the flames and smoke had decreased in the time we had walked up the glen.

Although we were never in any danger and could have continued our descent to the road, I am seriously impressed with the efficiency of the HMCG team and have since thanked them for getting all three of us off the hill safely.