With only 20 to go I still didn’t have plan for finishing the Corbetts! A completion date had been set for early July so I spent the first six months of 2010 on a mopping up mission across the length and breadth of the country. Jura, Harris and Knoydart had been visited so all that left was a trip to Arran and Rum.

Now the observant reader will notice than Arran is quite a long way from Aviemore so it probably wasn’t the most sensible idea to prepare for the trip with a 13 hour round trip over Sgurr nan Ceathreamhnan, Mullach nan Dheiragain and An Socach from the Glen Affric road end, followed by only 5 hours sleep. I left the house at 5 a.m and drove to Oban to meet Andy, by this stage Molly had recovered from her epic walk the day before and was raring to go. After a quick break in Oban she was reluctantly bundled back into the car for the drive to Claonaig to catch the ferry across to Lochranza on Arran.

After the short ferry crossing, we drove from Lochranza to Brodick and parked  in the car park by the brewery. It was already 12.30 and I was feeling the effects of the previous day’s exertions, laziness was beginning to overtake me and we decided to take the easy ‘tourist route’ up and down.

Despite being half asleep it would have been impossible to get lost on this route. We did feel somewhat overdressed (in a hill walking sense) as we appeared to be the only people on the hill (and there were many, many others) with boots and rucksacks. Most had trainers and a bottle of water, but they all got up and down OK so I guess the joke was on us for carrying so much! 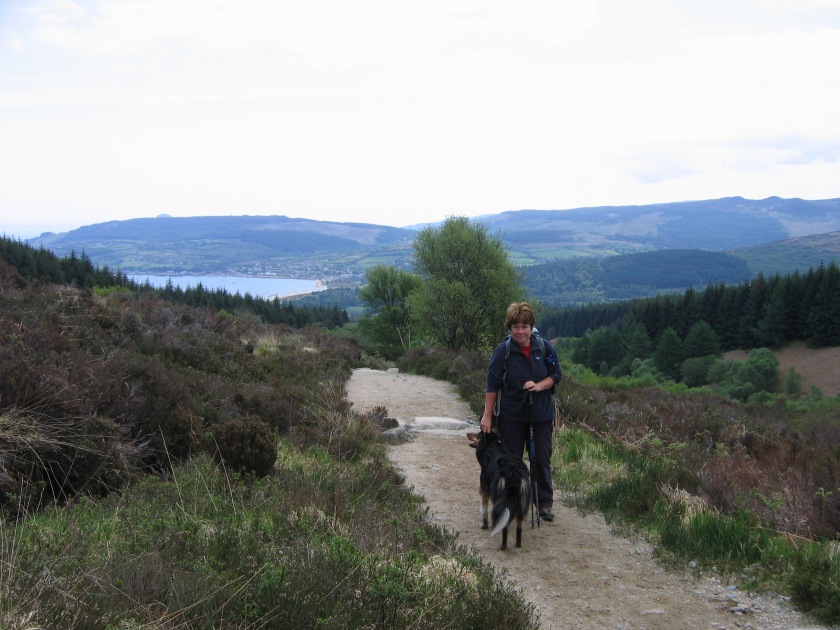 We continued on the gently sloping path until we reached the stairway beneath the summit.

After a couple of hours two very sweaty walkers and a hot dog finally reached the summit, luckily our late start had meant the almost everybody we met was on their way down and we had the summit to ourselves.

On arrival at the summit we noticed the RN177 rescue helicopter from HMS Gannet hovering around the Rosa Pinnacle on Cir Mhor and we were treated to an impressive aerial display for the next 10 minutes. 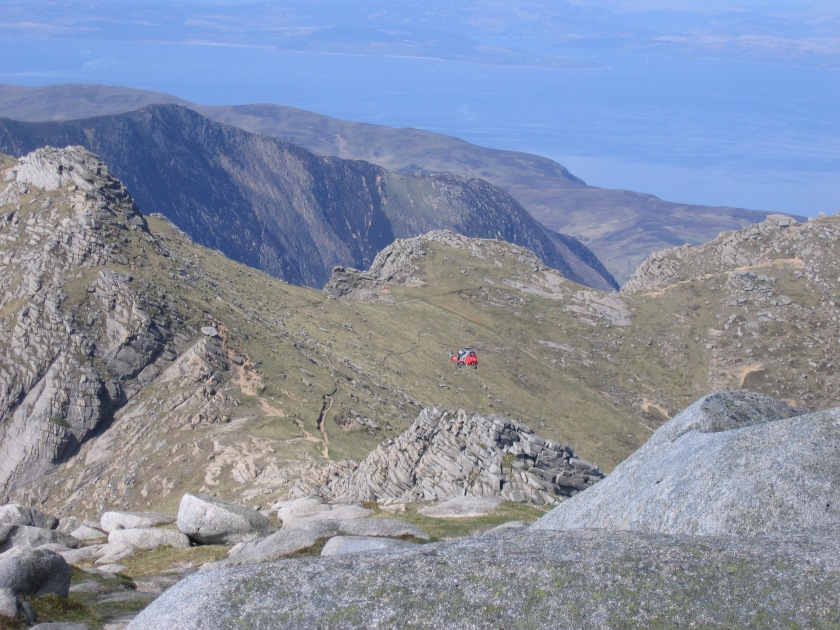 The summit views were impressive with the coast of Ireland visible on the horizon and Andy innocently pointed out the Mull of Kintyre. Cheers Andy, I spent the next two days humming that bloody song…………………you can go off people.

We drove to our accommodation in Lamlash, very tastefully decorated with a scary collection of cuddly toys and strict rules to keep dogs off of the furniture. Well she was tired. 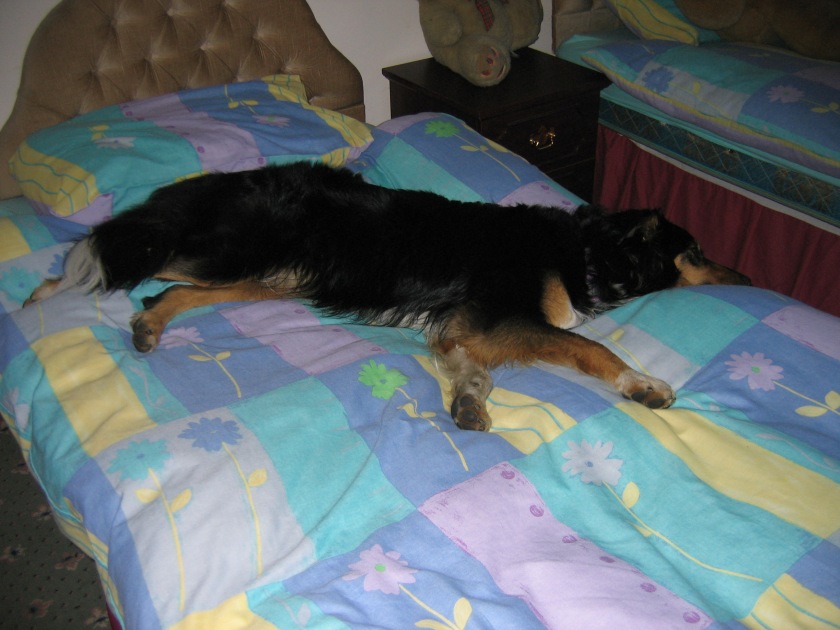 We awoke to another stunning day and took the short drive to Glen Rosa and parked just past the campsite.

We followed the track up Glen Rosa to the Allt Garbh were a good path followed the burn uphill and across the moorland towards Beinn Nuis. Thankfully this path was very dry and made for easy walking with gradual height gain and time to enjoy the views.

As we climbed the SE shoulder of Beinn Nuis the gradient steepened and the rock architecture was stunning.

When we reached the summit of Beinn Tarsuinn we weren’t sure exactly which boulder was the summit as we couldn’t find a cairn so we stood on them all just to make sure. 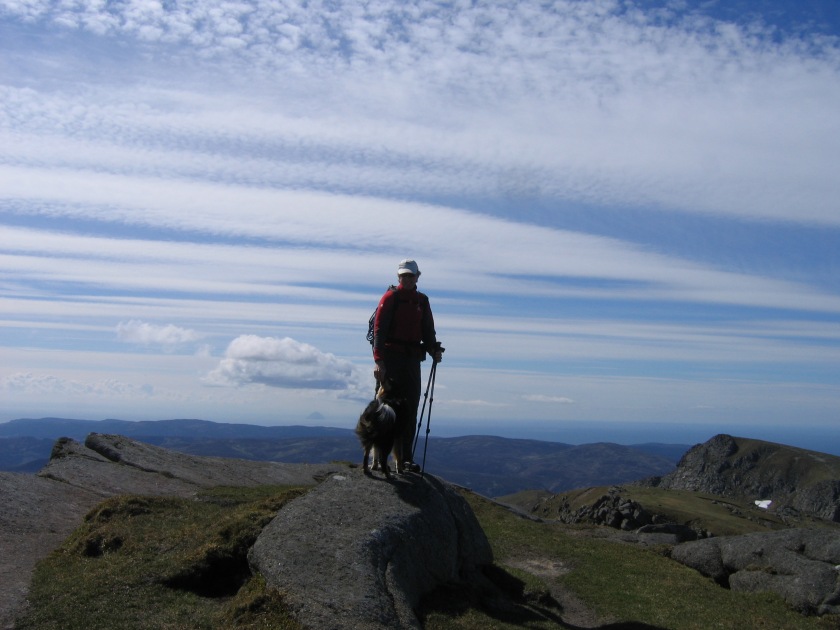 The descent from Beinn Tarsuinn was over steep slabby ground and route finding was quite easy in the good visibility but I would imagine in mist the many paths going off in all directions could be somewhat challenging. When planning the walk, we had decided that when we reached the Bealach an Fhir-bhogha if the weather was good, we would have a crack at the A’ Chir ridge and if not, we would take the bypass path round the side of the ridge.

Other than my lack of climbing ability and being accompanied by 23kg of hyperactive Border Collie there seemed no reason not to go for the ridge, Andy was keen so in a moment of madness I agreed. I had packed Molly’s scrambling harness just in case (a Ruffwear Webmaster) and it was to prove invaluable for the traverse.

The start of the ridge is pretty innocuous and an enjoyable ambley scramble amongst rocky towers with plenty of variety along the way.

Then we hit the first tricky down climb, quite difficult for me and Molly refused to budge.

Then things got very difficult for me and I certainly felt out of my comfort zone. I took the opportunity to take some photos to take my mind off the ever approaching Bad Step or Bad Steps as it turned out.

This looks easy. Ho, ho………..we reached a 2ft gap in the extremely narrow ridge that you simply ‘step’ over. Very simple if it wasn’t for the huge drops to the corrie floor on both sides. Never mind the rope, where are my reinforced pants??

The next thing to look forward to was the REALLY BAD STEP. Guide books go into lengthy detail on the way to tackle this and I’m sure if Andy had been with fellow climbers he would have enjoyed this bit. But he wasn’t and he didn’t!

Instead of a graceful down climb, Andy decided on a two stage abseil. The first stage was OK as I love abseiling, me first, followed by Andy with Molly attached to a sling below him and I caught hold of her once she was in reach and gently lowered her onto the ledge. Stage 2 was overhanging, so after a couple of metres I was descending into thin air with nothing in front of me. The momentary sensation of panic was followed by elation as I slid down the rope to the floor. I was actually enjoying myself! Andy took the next section SAS style and flew to the floor before Molly had a chance to realise she was flying.

All that remained was a simple scramble up to gain the crest of the ridge and the excitement was over. I looked at my watch and was shocked to see that it had taken us nearly 3 hours to traverse the ridge. We staggered down to the col above Fionn Coire for a well earned lunch.

The climb from the col to Cir Mhor is very straightforward with views across the Hunters Ridge to Caisteal Abhail and views of the Rosa Pinnacle.

We continued down the NW ridge of Cir Mhor onto The Hunters Ridge where we found a very green spring on the way to Caisteal Abhail. There is even a piece of pipe in the spring to help you fill your water bottle.

The summit of Caisteal Abhail is dotted with granite tors which are very reminiscent of Dartmoor or the Cairngorms. 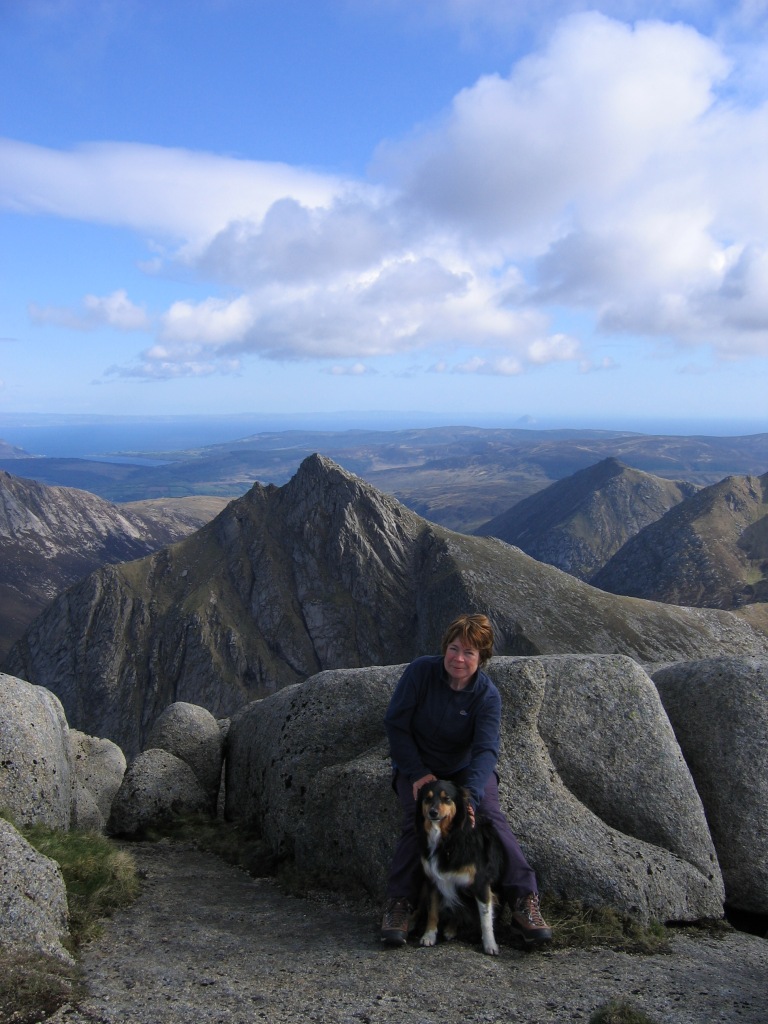 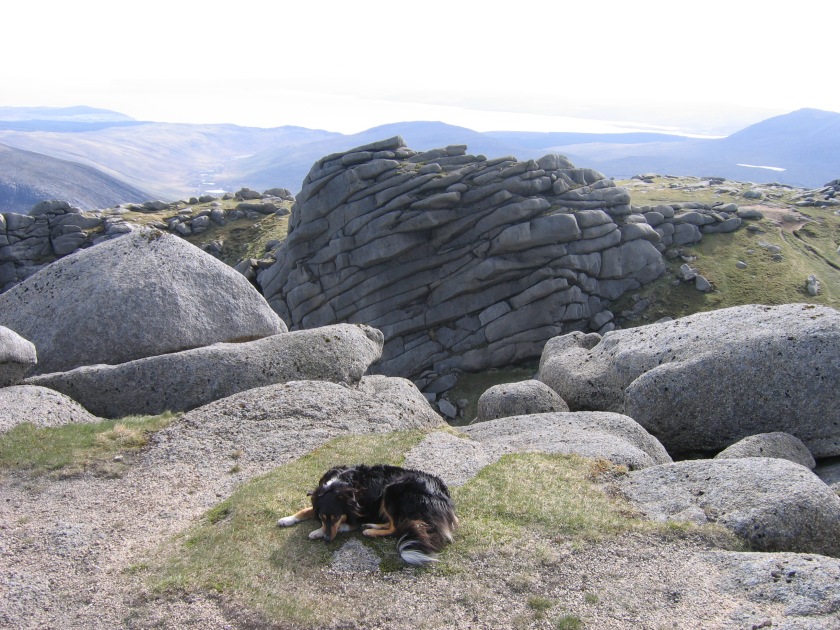 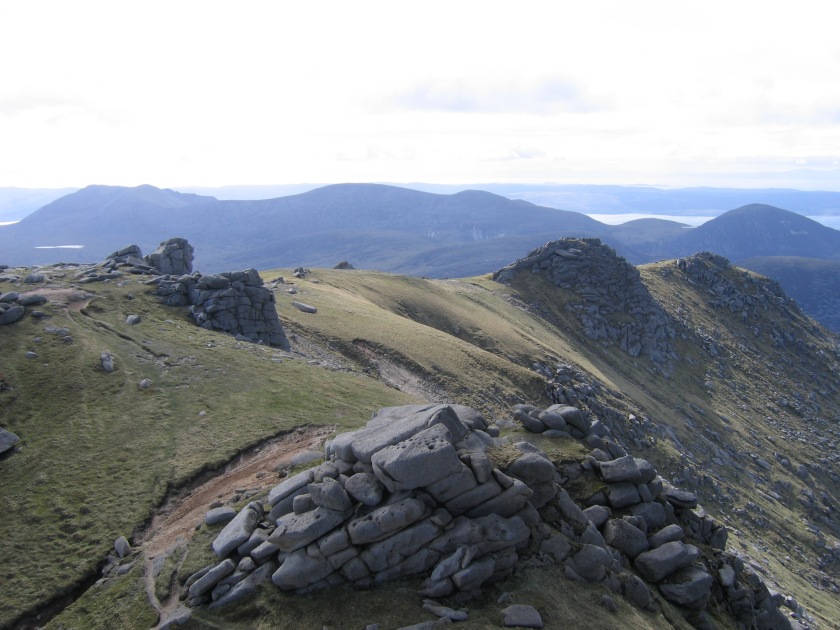 We returned back down the Hunters Ridge and picked up a traverse path around the top of Garbh Choire-dubh to the col at the top of Fionn Choire. From here a heavily restored path took us below the Rosa Pinnacle back into Glen Rosa for the walk alongside the Glenrosa Water back to the car. 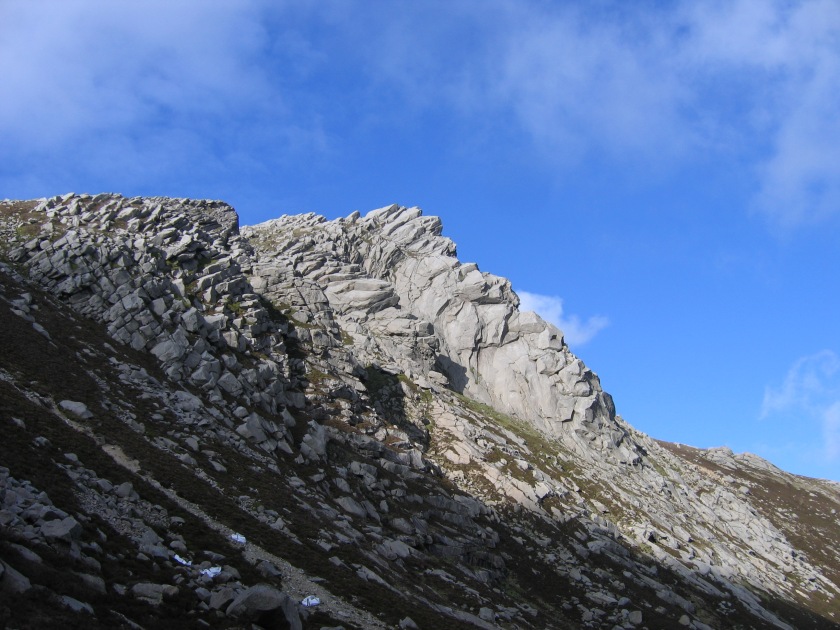 We made it back to the pub 10 minutes before they stopped serving food.

It was a challenging but rewarding day and when I go to Arran for Corbett Round Two, I will certainly be using the bypass path.

The following week saw the final installment of the Island Odyssey, we were off to Rum. We arrived at Mallaig along with the hordes of day visitors also planning to go to Rum. The cloud was swirling around the hills so did not get the stunning views of the Rum Cuillin we were hoping for. There was a stampede off the ferry but laden with food, Diet Coke and camping gear we took our time to stroll along the road to the campsite.

The campsite sprawls along the shore and there are very good showers and toilets, all for just £5 per night. We pitched our tents as near to the shore as we could as we were expecting the wind to drop overnight and were wary of a midge attack. We then took up position on the shore and watched the world go by, some fool even braved a swim! 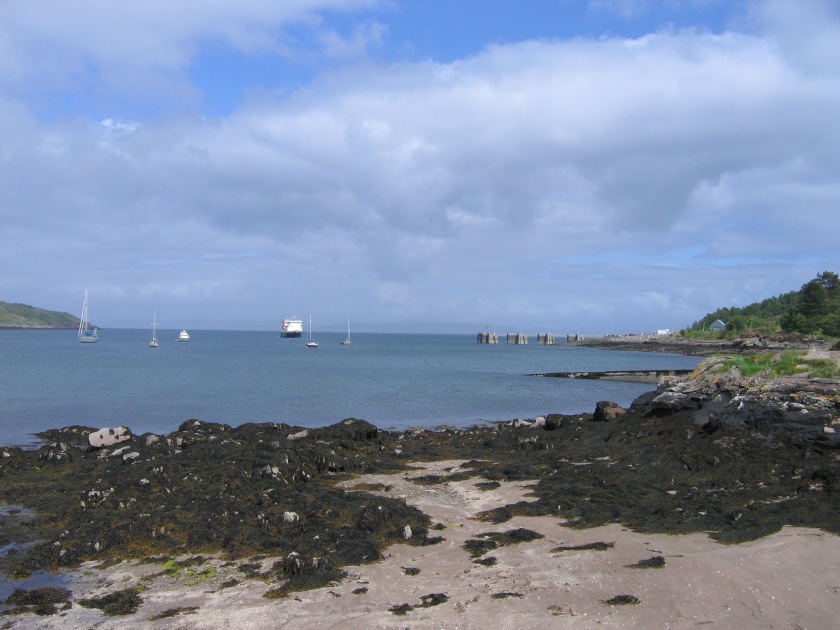 That evening we ate at the Bistro in Kinloch Castle where they had kindly put a table for us in the bar so Molly could be with us and wouldn’t have to be tied up outside. Three courses for £15 wasn’t bad but was the food was very reminiscent of school dinners! Once we got back to the tent it was midge hell……………….after some speedy ablutions we were zipped up in the tents for a very early night. It was horrendous, Molly probably brought a couple of million midges into the tent hidden in her fur and we drifted off to sleep overcome by the aroma of Skin-so-Soft and midge coils, we were swathed in midge hoods and were serenaded by the gentle sound of the little blighters bombarding the tent all night.

It was a little better in the morning and I went down to the end of the old pier as this appeared to be the windiest spot on the shore for a comfortable breakfast.

We walked up the way marked path behind Kinloch Castle into Coire Dubh with views back over Loch Scresort and across to the Skye Cuillin. Water levels were exceptionally low and we climbed alongside what was left of the stream, across a boulder dam and then zig-zagged up Cnapan Breaca where we gained our first views of Hallival and Askival. 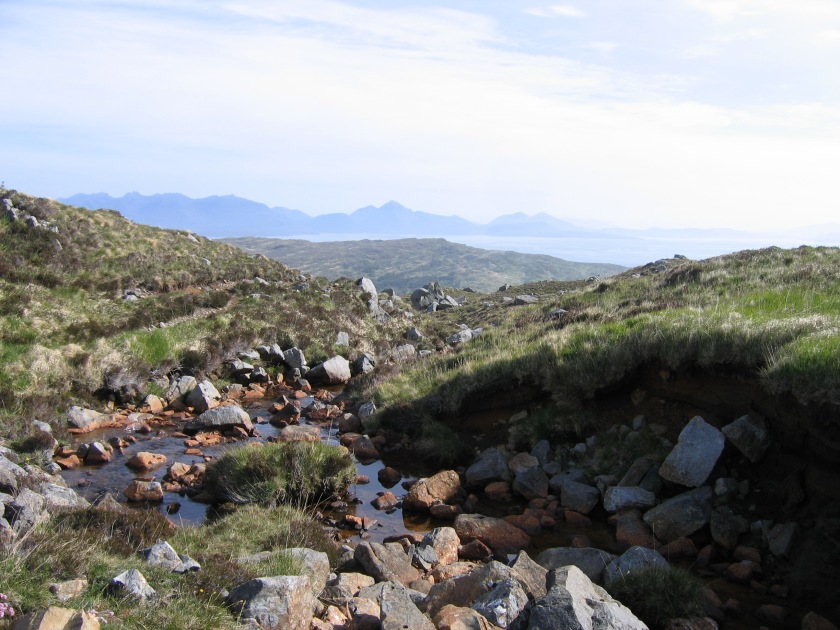 Still mentally scarred from last week’s Arran traverse we opted to bypass the Askival Pinnacle by a very obvious path on the seaward side of the ridge and climbed steeply (again) to the summit.

From the col it was a steep climb to the summit of Hallival, (steep was to become a recurring theme throughout the day). The Manx Shearwater burrows were very apparent and most of these were occupied with the entrances liberally smeared with guano. Norsemen heard the call of the Manx Shearwaters on the summit of Trollaval and thought the mountain was inhabited by trolls, hence Trollaval. 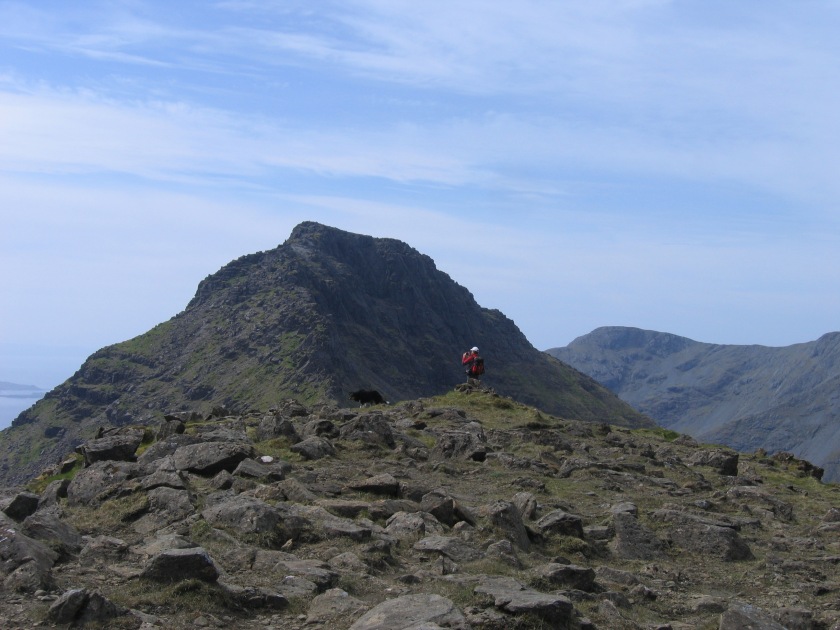 We had lunch at the summit but we couldn’t put off the brutal descent from Askival any longer. It was very hard on the knees but there was a path all the way which allowed us to concentrate on the effort involved rather than worrying about route finding.

The simplest climb of the day proved to be the one up  Trollaval, which has two summits of apparently equal height, however, the one furthest away  is the true summit……………….isn’t it always!

The descent from Trollaval was tricky but it allowed us to study our route up the seemingly impenetrable face of Ainshval.

At first there was some scree, then a grassy rib followed by a path of sorts,  up loose, rubbly slopes until we suddenly emerged onto the flat summit plateau a few feet from the cairn.

From here the route ahead changed in character to more gentle grassy slopes but after so much climbing Sgurr nan Gillean still looked a long way away.

Looking back to my penultimate and antepenultimate (yes that is a real word) Corbett’s. 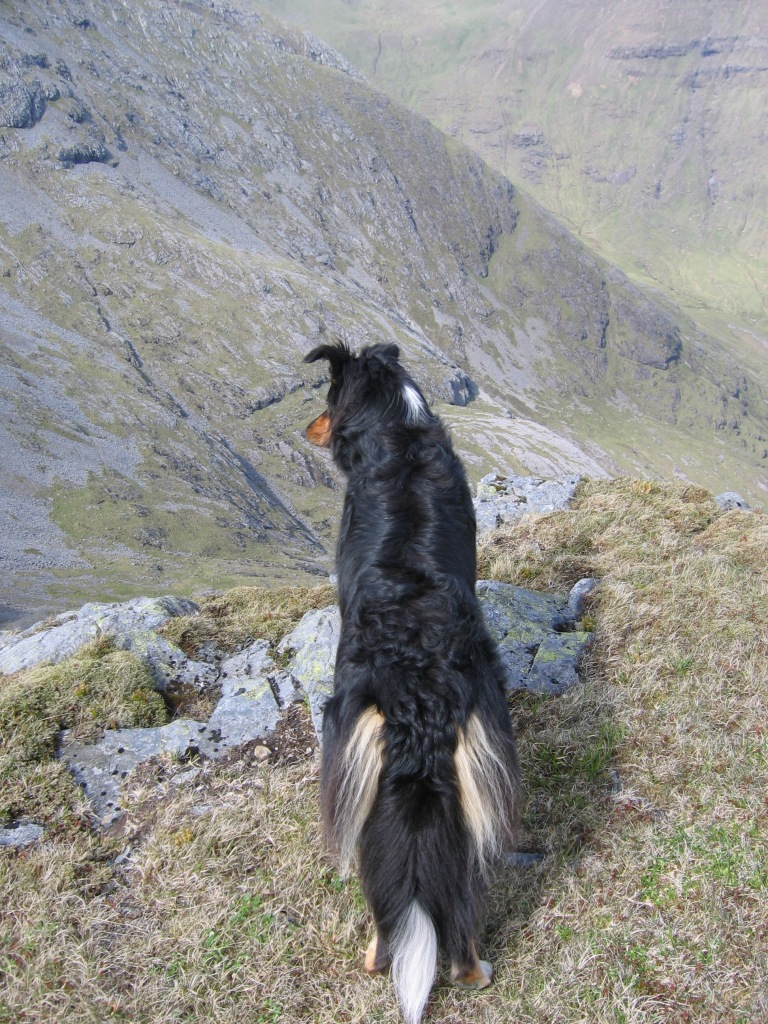 From the summit of Sgurr na Gillean we took an unpleasantly steep route down to emerge above Dibidil and a welcome foot soak in the river.

The Dibidil path was hard work at the end of a long day but thankfully it was dry, but I can imagine that in typical Rum conditions this would be purgatorial.

After 12 long sweaty hours were emerged back at the campsite to be greeted by the midge hordes. We had a shower and a very quick campfire supper before the nocturnal man/woman versus midge battle begun.