Plan, what plan?
I never really had a plan for completing the Corbett’s, I just plodded my way through the list and somehow found myself down to the last 20. However, ticking off the last few required trips to Jura, Harris, Arran, Rum, oh and Knoydart! Time to dust off the ferry timetable again.

The sudden change in the weather had taken us all by surprise. Over Easter we were still wading through knee deep snow in Aviemore and by the following weekend it was the warmest place in the UK.

The good weather continued and after a short hop across Loch Linnhe on the Corran ferry I arrived in Glen Huirich near Kinlochan to climb my last Corbett in Ardgour. After 30 minutes along a forest track I reached the small cairn that indicated the steep route through the forest up onto the ridge.

The route continued along a long undulating ridge with lots of false tops but it was grassy and soft underfoot and I was pleasantly surprised to find a path leading the whole way to the summit cairn.

The ridge stretched ahead and the summit appeared to be a long way away but the ridge was a joy to walk on, sunny, warm and ever increasing views.

After the 602m top there was a 6ft high deer fence. This is one of the worst sights to be greeted with when out on the hill with dogs, but thankfully this one had a chink in its armour; a large hole suitable for Molly to climb through. I didn’t need my trusty tin snips this time!

Just after the 602m top is a short scramble. It was good to put hands to rock again, hardly a scramble for Molly as she ran up in a couple of bounding strides………………show off!!

Looking towards the summit cairn. A zig-zag path leads effortlessly up through the crags to the top. 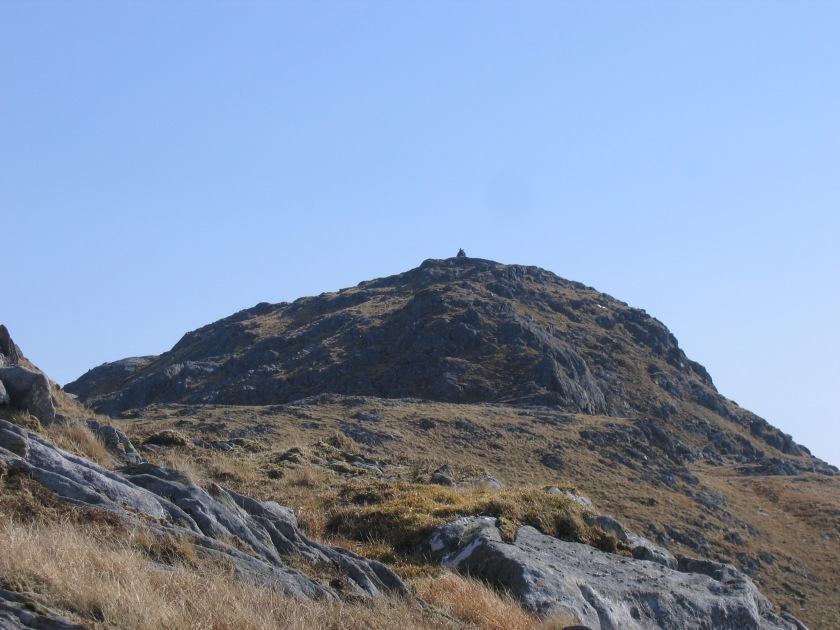 All that remained was the long walk out.

A thoroughly enjoyable walk and a hill I certainly wouldn’t mind returning too.

We then travelled down to Oban to stay with Andy the and next day we drove to Kennacraig to catch the ferry to Islay. From Islay I took the Feolin ferry to Jura, a mere £17.90 return for 400m of sea.

We stayed at The Jura Hotel which provided excellent dog friendly accommodation and good food.

The weather was stunning again, I couldn’t believe my luck.

We drove up Jura’s one road and parked at the 3 arched bridge over the Corran river at the start of the walk. The route crosses grassy moorland above the river towards Loch an t-Siob, easy walking but a bit squelchy in places along a very clear path with a chance to enjoy the views of The Paps.

All the way along the route there were literally hundreds (no exaggeration) of caterpillars. 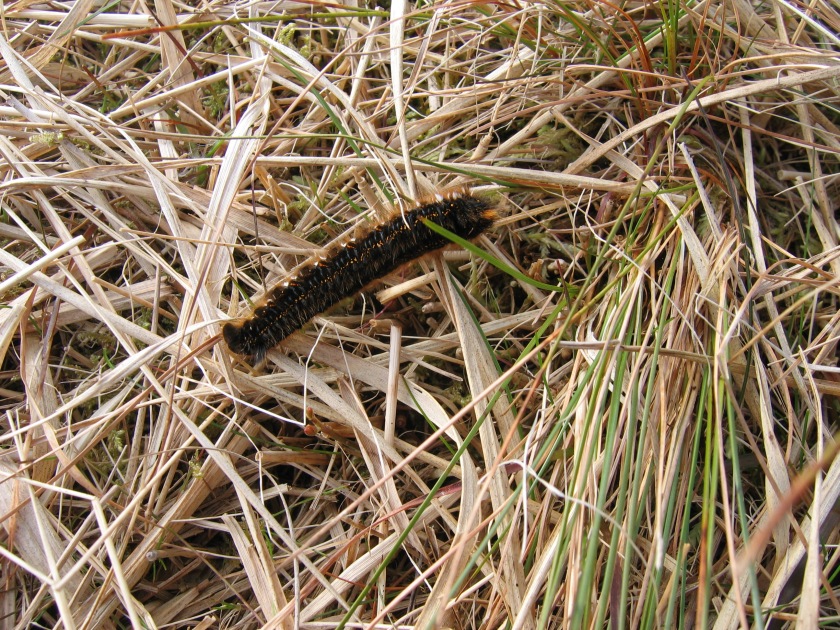 After an hour I reached Loch an t-Siob where there are stepping stones crossing the outflow.

We then followed a smaller grassy path above the lochan gradually rising to the bealach between Beinn an Oir and Beinn Shiantaidh.

The route of ascent follows the grassy rake/shelf above the snow patches to a knoll on the ridge. This is an excellent path and makes route finding very easy.

The grassy rake misses the worst of the rough quartzite and emerges onto the ridge at the conspicuous sandstone tor at a small col. 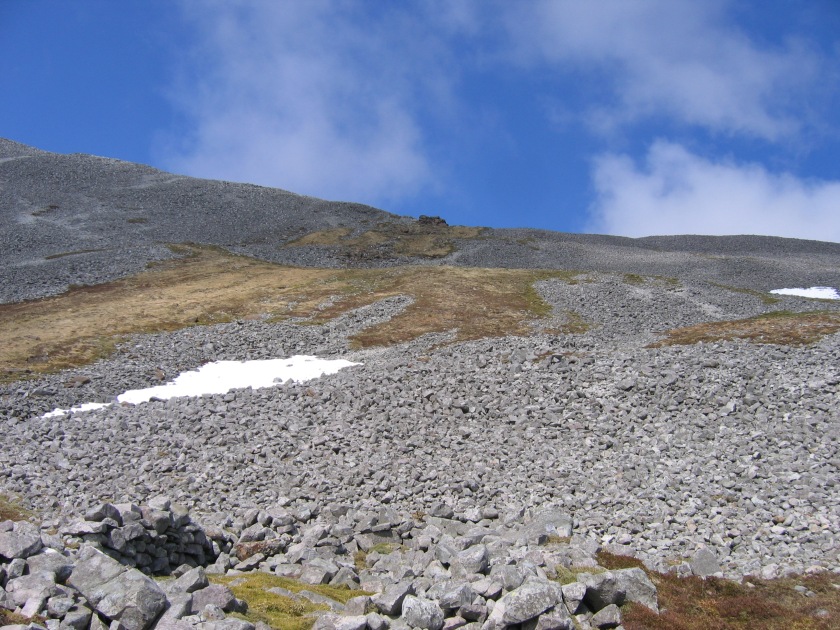 At the col there are two dry stone buildings and stunning views out to the west coast of Jura.

The remaining 30m of ascent are along a ‘pathway’ between tow low walls to the trig point which is surrounded by a circular shelter.

Beinn a’ Chaolais, the third Pap, makes my knees ache just looking at it.

We descended the same way and were treated to an aerial display on the way down.

The drive back to Craighouse was very picturesque. 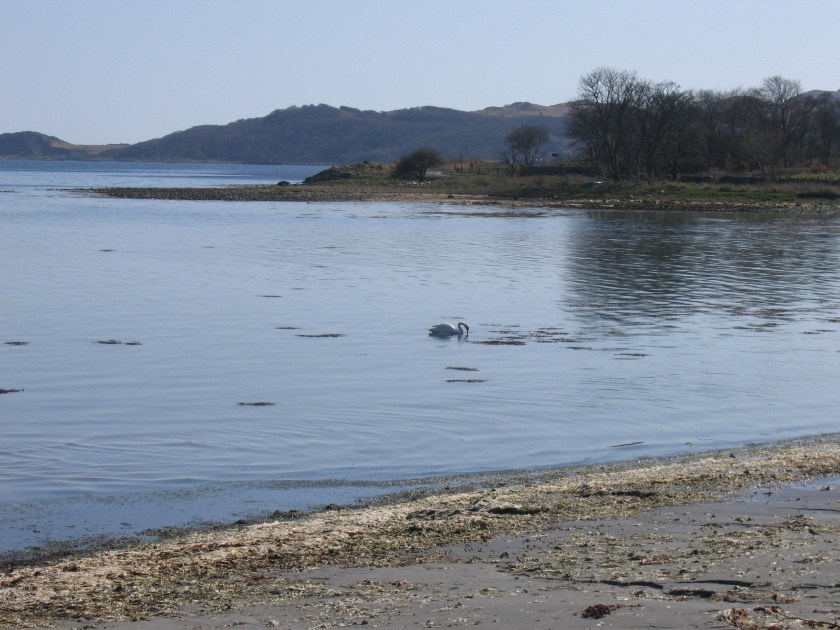 On Thursday we drove back to Islay and caught the ferry back to Kennacraig and spent the night at Andy’s again.

Week 2 was all change. I was off to Harris, we were joined by Stewart and the weather had deteriorated. On the way to Ullapool to catch the ferry to Stornoway we climbed Cul Mor as both Molly and Stewart needed to climb it for their Corbett rounds. It was extremely windy with snow showers but thankfully visibility was excellent outside the snow showers.

We climbed up the steep SW ridge were there was a substantial amount of snow which was very slippery through the boulderfield so we elected to descend down to the col below Creag nam Calman and then traversed round Meall Diomhain to regain the stalkers path.

I am sorry to admit that my first visit to the Outer Hebrides was more of a ram raid purely designed to bag Harris’ only Corbett, Clisham.

The journey from Ullapool to Stornoway was certainly memorable. Alarm bells should have been ringing when we got out of the car and I casually remarked that I hadn’t seen them lashing the HGV’s down before. What a naive fool, our welcome aboard from the captain told us that the sea state was rough and transit time about 2 hours 45 minutes, well it was the longest 2 hours 45 minutes of my life!! The ship was buffeted by huge waves breaking over the bridge and hitting the side so hard it felt like another boat had hit us. We eventually arrived in Stornoway, rather green about the gills, to be greeted by 40 mph winds and hail.

Thankfully when we left our B & B the next morning the winds had dropped slightly and there were sunny skies between the snow showers. We drove down to the start of the walk by the Abhainn Mharaig  at the foot of Clisham’s SE ridge.

The climb is initially over boggy moorland alongside the stream and then climbs steeply up the SE with intermittent traces of a path where the hillside becomes more rocky with the views opening up all around us.

The last section of the route was over a rocky narrowing ridge which was quite slippery in places due to the amount of new snow. After 1 ¾ hours the summit cairn came into view.

Once again we followed our route of ascent back down and during the afternoon drove further north into Harris, a stunningly scenic island that certainly needs more exploration.

We caught the early morning ferry back to Ullapool and the sea was far calmer and it was then back to Aviemore to be greeted with a new covering of snow on the Cairngorms. It appeared that there was no end to this winter!